In the main wing of the Transformers BotBots mall, members of the Backpack Bunch can mostly be found by the office supply store on the ground floor. Which seems like a perfectly logical place for them to hang out, doesn't it? 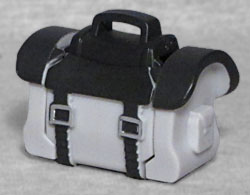 Looking at the official bio on the BotBots site (and the alt text on the image to the right, there), you'll find that this is meant to be a messenger bag. Doesn't look much like one, it must be said. Aren't messenger bags usually fairly flat? This one is wide, like a duffel bag. It has sculpted straps running under the body and holding the flap down, and pockets on both ends. The gray and black colorscheme is a little dull, but the various repaints in later series would certainly take care of that. The official art shows a shoulder strap that doesn't exit.

BotBots are generally simple designs easy to convert, and the toughest thing here is getting the feet to fold down out of the bottom. Other than that it's just a question of moving the arms to the sides and pulling up the head.

Totes Magotes wants everyone to know that he's hand-stitched, 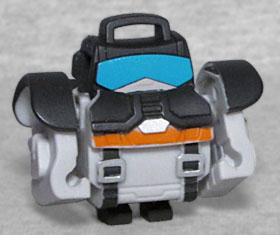 locally sourced, and made out of organic materials. He's rated 100% adorbs and the amount of stuff he can hold in his pockets is completely amazeballs.

The change between bag and bot is subtle, but it works. T-Ma-G looks like a very strong little robot, with thick arms and no neck to speak of. The blue of his visor was already visible in the altmode (which is why the photograph up above is of the back), and the orange stripe across the chest adds just a little flash of color to make the design more interesting. 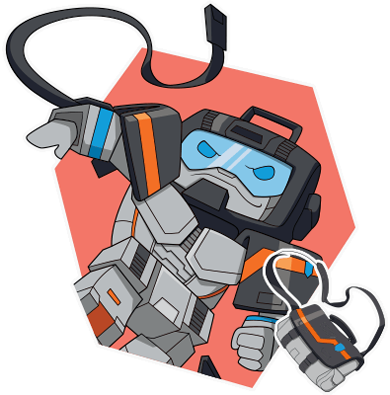 Totes Magotes is only available blind-packed, as #21.