The fate of Cybertron! Windblade learns more about 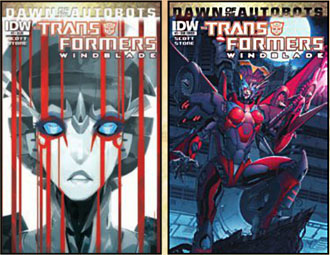 the new face of Cybertron - and lesson number one is: never underestimate Starscream! She's trapped in a no-win situation - but what is the scheming Decepticon really after, and how far will he go to keep Windblade out of his way?

We start this month with an absolutely beautiful cover. The standard cover - by regular series artist Sarah Stone - is a striking image that's been attracting attention since it was first revealed a few months ago: it's a closeup of Windblade's face, with red streaks raining down like blood. The subscription variant cover, by Alex Milne, is a nicely dynamic piece, but isn't as graphically "punchy" as the standard one.

After our "Previously" page and a few

introductory headshots, this issue's story starts right where last month's left off: in the middle of a huge fight. In fact, nearly half the issue is spent on that fight - nine out of 20 pages - with Windblade and her hastily assembled allies brawling deep within Metroplex, trying to save his life. Of all the issues so far, this one has by far the fewest locations: there's really only one more after the fight wraps up (and a brief cameo by a third).

The issue does have two important developments, though: first of all, we finally come to the point in any mystery story where the main

character's suspicions of whodunnit are either proven correct or misguided - I won't tell you which it is in this case, in case you've been reading along. But secondly, we get the introduction of a new faction, formed by Starscream. They're tossed in so briefly that it really feels like they're not necessarily a part of this story, but rather a set-up for something else. If they're used elsewhere, then this is a cool, low-key way to introduce them; if this story is all they're used for, then it seems like a waste. 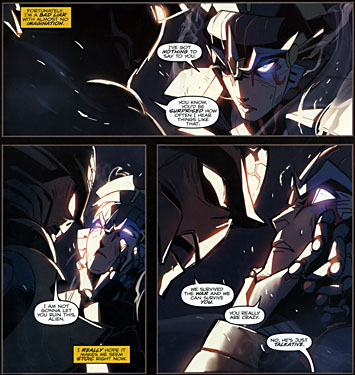 In previous issues, Sarah Stone's artwork had a lot of varied colors as the action moved around on Cybertron. But since this issue has so few locales, we don't really get that kind of variety this month. In fact, even after the scene change, the color palette stays mostly in the reds (though the gutters between the panels go from white to black, so there is a clear difference). However, there's one scene that has incredibly stark colors, almost like a Sin City comic. It's a tense scene, and the coloring just plays it up even more.

The artwork beneath the colors is just as

flexible and expressive as ever. And as we've seen the last few months, the panel borders are generally straight and unadorned, so we end up forgetting they're there. But when it's time for the action to kick up, things get much more wild and unrestrained, like the art itself is surprised by the events unfolding.

This is the first issue to have a letters page, and according to the editorial note at the head of the column, every bit of feedback they've received about the comic has been positive. How awesome is that? Remember when the series was announced and the fanboys were flipping out about how this was going to ruin Transformers forever? It's nice to see the quality of the book has apparently won them over.

And oh man, what a last page! Mairghread Scott knows how to write a hook!