This is the latest in a series (of indefinite length and regularity) of blog posts memorializing cancelled toys. Our figure today is Hasbro's Titanium Soundblaster.

The 6" Transformers Titanium Series line had some decent figure, but also some of the worst hunks of ass ever to carry the "Transformers" name. For example, Soundwave. Somehow not recognizing how terrible that toy was from the ground up, Hasbro had plans to redeco it in black as Soundblaster: 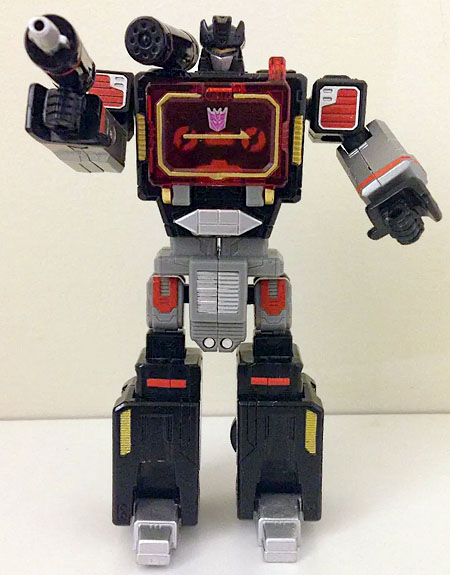 And instead of Soundwave's Laserbeak tape, this one would have come with a miniature Ravage: 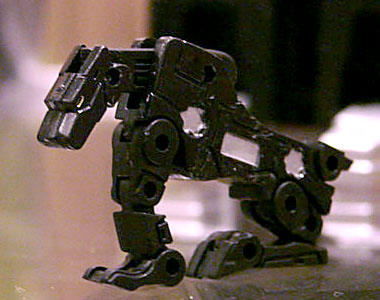 The repaint was shown off at BotCon 2007, in the "upcoming products" display, but the entire line was cancelled soon after. When Prowl was released, Soundblaster was pictured as a cross-sell on the back, but that was only because it would have cost too much to redesign the packaging. The character's bio was eventually uncovered as well:

No Decepticon is the subject of as much rumor and conjecture as the inscrutable Soundblaster. No matter the situation, his face is a sinister, impassive mask, betraying not even the slightest hint of emotion. If his expressionless face shows a glimmer of reaction, it is only a reflection; a trick of the light bent off his polished faceplate or depthless optic sensors.

Much is made of the power he could wield as Decepticon communications specialist, for every secret plan, every hidden bit of data passes through his file system. Little attention is paid, however, to his other function – interrogation. Every Autobot fears capture because of the cruelty he would experience at the hands of Megatron, but it is under this robot's care that such cruelty is dispensed. Soundblaster goes about his awful work with detached efficiency, doling out pain the way a supply drone might hand out Energon chips.

A very small number of physical copies of Soundblaster have turned up over the years, but no Ravages; it's possible those are just knockoffs using stolen molds. In any case, no one's upset this bad mold was not rereleased.