You know, sometimes I doubt the maintenance conditions of the Transformers BotBots mall. Just look at the east wing for instance: why is there an avocado just lying on the floor? A whole bunch of the Fresh Squeezes live in a kiosk down there, but that's no excuse to just lay your produce on the floor and expect it to stay sanitary. This isn't a Quiznos!

Remember in Daredevil there was the joke about Nelson and Murdock 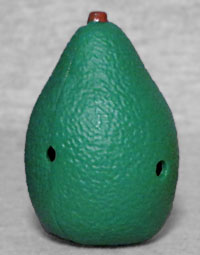 being "avocados at law"? It's because they were having trouble with the Spanish word abogado, which means "lawyer." But the modern Spanish abogado is an altered spelling of the original term, avocado (which came from the same Latin roots as "advocate"); the reason the fruit was called that in Spanish was because they had trouble with the Aztec word for it, ahuacatl. Now, if the Aztecs had a word for "lawyer," I don't know what it is - ahuacatl is the word for "testicle." You know, because they look the same: round, lumpy, green, each about 4-5" long... it's just natural. This one has a little stem poking out the top, and the outside is textured just like the real thing. The real avocado, that is, not the real testicle. The green color is a bit bluer than it should be, and it's solid rather than having any dark variation on the skin.

Like Sour Wing, Avocando is basically just a shellformer: to convert, you open the two halves of the avocado. Oh, but now you also have to pull the legs down! Much better!

Get pumped! Get hyped! Eat right with Avocando! No more sugars in your boogers! Get some greens in your spleens! Remember, kids, you are 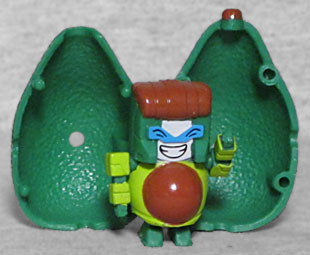 what you eat! Never say can't do, say CAN do! Like Avocando! That's me!

The robot inside the shell is at least good looking. It actually looks like a robot that might live inside an avocado's skin, thanks to the big brown bump on the belly - that's an avocado pit! The arms and legs are very blocky, contrasting with the round body. The light green is the color of avocado meat, while the darker color matches the skin. The brown "hair" is an odd choice, but the face is average for the line: an overdone grin and a blue visor over scrunched-shut eyes. 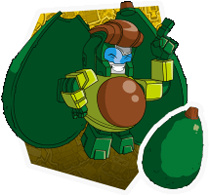 Avocando is available in two 8-packs: one Fresh Squeezes, one Goo Goo Groupies. And since an alternate name for an avocado is an "alligator pear," it makes sense that the mold was repainted in Series 4 as...