This, I believe, is a first: as far as I can remember, we have yet to review any repaint BotBots who were part of the same tribe as their original. Like, we can review three tacos, but they come from the Greaser Gang, the Fantastic Fuelers, and Los Deliciosos; but Series 3's Avocando was one of the Fresh Squeezes, and so is Series 4's Peary Peculiar.

Pears have a distinctive shape, which this mold duplicates well enough, 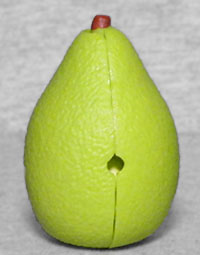 but they also have a smooth skin, which this former lawyer does not. If you've never just eaten a pear by biting into it like an apple, its skin is thicker and waxier than that, but still smooth. The bright green color here is close to the real fruit's green/yellow hybrid, and there's a brown app for the little stem poking out the top. And just as avocados were a symbol of male fertility, pears are a symbol of female: their shape is similar to a uterus (upside down), and they were sacred to both Hera and Aphrodite - two of the most, uh... "physical" goddesses around. And if Rome's Pomona is really an aspect of Greece's Demeter, then you've got all three. To paraphrase Steve Miller: really love your pears, wanna shake your tree.

Nothing like a good "shellformer" conversion to make a Transformer boring. You split the outer shell and that's about it. Yes, you have to pull the legs down as a second step, but it's still hardly complex.

It can be difficult to figure out Peary Peculiar. It's almost like he has a pair of personalities. Sometimes he's an aspiring artist on a spiritual quest to paint the perfect fruit bowl, and other times he's a highly motivated business executive, 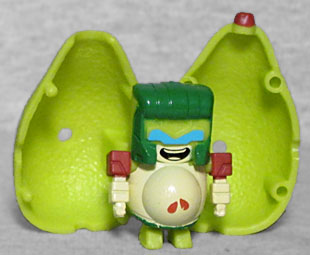 determined to turn the Fresh Squeezes tribe into a highly profitable company. When the two personalities get to talking, that's when it really gets strange.

What worked as an avocadobot doesn't necessarily work as a pearbot. Like, pears have a core, just like an apple does, but this mold has a distinct round tummy that was meant to be the avocado's pit. Peary attempts to disguise it by painting two small pear seeds on it, but it still stands out as not belonging. The colors are great - a very pale yellow like the meat of a pear, contrasted with brown on the shoulders and a darker green on the head - but overall the designers are asking a little more from this mold than it can provide. 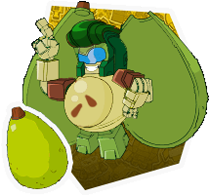 Part of Series 4, Peary Peculiar is available in a Magic Tricksters 5-pack or a Movie Moguls 8-pack.