Not much shopping is afoot round these parts so I'll take this chance to once again get caught up on some pretty great 'mail hauls' from the past couple weeks. 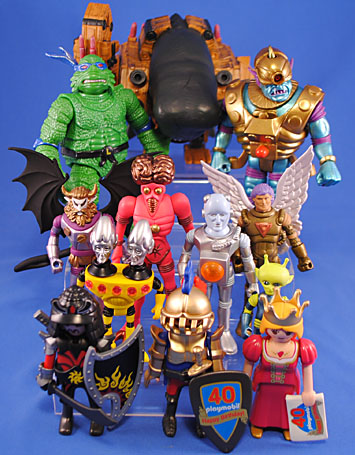 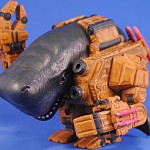 Fellow OAFE Poe Ghostal recently did another collection purge so I snagged this thing off of him. I have a big love for whales and am particularly fascinated by the Sperm Whale, and who doesn't love exo-suits, so this guy has been on my radar since his release though the $45 price tag kept me at bay. The first thing I noticed upon getting him was how big he is. He's basically 3.75" tall, which makes you think Star Wars, i.e. small, but he's also about 5.5" long and 5" wide! I'm not sure what scale he's in but as-is he can kick your entire 4" collection's ass! Both sculpting and painting are pretty darn good, too. There are five points of articulation (shoulders, forearms and tail) which is actually more than I expected. The design, being an exo-suit, suggests plenty of places for more articulation but I don't necessarily mind loosing those likely due to budget constraints. What is a little frustrating, though, is how parts are separate pieces and just glued on rather than using a simple articulation point. This is certainly a pretty fun and unique piece in the collection. 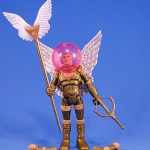 A couple months back the Four Horsemen had a great "Scratch & Dent" sale so I took advantage of that to finally get caught up on my Outer Space Men collection. Commander Comet is clearly the Angel half of Series 3's biblical pair. I've never been a huge fan of gold so I'm not terribly crazy about this figure but the wings are pretty cool and I quite like the scaly armor. In fact, it'd be cool to see this guy repainted into "sea creature" colors and come with a repainted Astronautilus or Horrorscope head. I like the crossbow gun and the wing staff too. I dig the mid-torso joint but since that takes the place of a waist joint the recombining options are limited/non-existent, so we are stuck with that odd belly button. All in all, this guy just isn't the tickle party the earlier and later figures were. 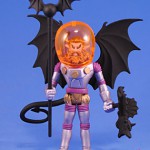 Mystron is totally-not-a-devil, so don't even worry about that. The head is a little hokey but I really dig the angular torso. The poofy pantaloons are a bit goofy but I dig them in an "olde timey devil" way, especially were this guy to be repainted in red and black hues. His tail and gun are neat but I quite like his staff and love his wings. Totally bizarrely, though, none of them are cast in black plastic; they're all painted with a very chalky feeling flat black with feels weird (and prone to scrapes) and looks odd against the shininess of the rest of the line. This is a figure really held back by the color choices of the original figure, unfortunately, despite some interesting design features. 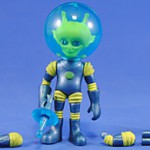 This guy... he's both the best and worst of this batch. I really like the bright, vivid colors and as such he's "feels" the most like an "Outer Space Man." On the downside is his almost overbearing cuteness but what really hurts this figure is his tiny size. I dig his ray gun and love his tiny little air-tank backpack but he really feels lacking compared to the others. I really wish they could have added something to repaint and include with him just to plus it up a bit (like maybe two of Astronautilus's tentacles in lime green). Oddly, though, thanks to some stuff in Series 5 he's kind of the one I'd like some customizable doubles of. 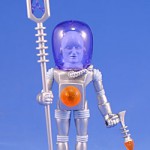 Much like Commander Comet this guy suffers from an almost overwhelming blandness of color. The head is a little too goofy for me but the bubble-helmet fits on snugly and its dark hue helps break up the light colors of the figure. For some reason I expected the big square on his waist to be a removable and wearable ring... but it is not. I like that the "jewel" bit is trans-orange, and it would have been cool if they'd included one or two other colors as alternates. He gets a familiar ray gun as well as my favorite weapon in the entire damn line - the electro-staff! The trans-purple electricity between the forks is AWESOME and I am so happy and grateful that the 4H made it translucent. I just love that damn thing so much! 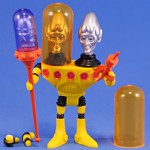 Well, if Alpha-7 wasn't goofy enough for you... Despite being a shorter figure I definitely feel like we're getting our money's worth here. The bubble-helmets are individual pieces (I expected them to be one piece) and fit very securely on the heads (and the heads and black collars are separate pieces too). The staff is a great piece and the rod can unplug from the rivet/platform from which the two-sided mini-head and bubble-head can also be removed. The trans-pink dots are separate pieces (and presumably removable) too making this figure basically Glyos overload! I mildly want a second Alpha 7 to put the little staff head on. The color choices on this figure are VERY fun making this guy a surprising favorite of mine. 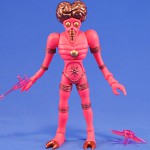 "If we make him pink, Universal probably won't sue us!" Because you you blatantly stole the Metaluna Mutant design, Mel. The design of this figure, despite his questionable legality, is actually pretty good - it's just lessened by weak color choices from the original figure again. The pink is just... utterly overwhelming and the gold does it NO favors. I'd love to see some cool repaints of this guy, but I'm sure the legal issues are too worrisome (not to mention interest in the line is effectively over). I like his starburst accessory, but really - pink again!? He also has mid-torso articulation rather than waist but his dimensions are too big to be compatible with Commander Comet (which is pretty crappy cause that could had led to some cool kitbashing). The best thing about this figure is the big surprise that his huge brain is removable! A giant Glyos brain? Yes please! And that's the other thing I'd kind of like another Alpha-7 for - a little Brain-Bot! 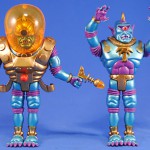 What is not to like about this figure? The colors are fantastic and play very well with each other. Of course, as a fan of metallic blue the skintone could possibly be the main draw for me here but I really like the 1960s vibe of the head too. I especially love his gold helmet. It comes off fairly easily as does the bubble (which has a lip along the bottom to hold it securely to his collar) but the armor/harness was tough to get off. The latter has two odd little c-clamps which are apparently holsters for the guns - kind of neat. I really dig the trans-orange bulb over the guns though it's a little odd that they seem to be glued on. The gold collar under the head is also glued on to the torso, which seems odd for a line built around Glyos joints. Those joints have always left me a little 50/50 but I appreciate the interchangeability. I just get frustrated by the free-spinning calves and overall the connections do feel a bit wobbly on this figure, but at least he has elbow joints! This is easily my favorite figure in the entire Outer Space Man line and were he cheaper I'd definitely get a third. I might even build a little diorama for him like the Horsemen did for the card art on some figures! 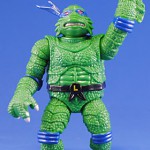 I don't know what's wrong with me. I love the Universal Movie Monsters and I love the Teenage Mutant Ninja Turtles so why the hell haven't I got the eight cross-over figures Playmates made!? The sculpt is a nice blend of Leo and the Gill-man and is wonderfully detailed (it has a 1994 date stamp making it 20 years old and is still way more detailed than all the figures Playmates is doing now). I was really pleasantly surprised to find that he has retained the shell on his back, though it too is done in a bumpy, angular Creature style. Articulation is fairly limited with a swivel neck, shoulders and elbows and the classic balljoint hips (but why not the shoulders?). The paint is simple and there is a very nice metallic spray on the back to add a nice sheen. The figure originally included a trident, sword and harpoon gun which are sadly not here which just gives me even more of a reason to start working on getting that full set of figures. 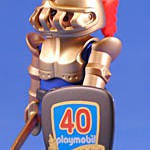 This is the 40th Anniversary of my beloved Playmobil and to help celebrate it Playmobil made special promotional figures that they gave out at Toy Fair and I was over the moon when long-time reader Max wrote in to say he scored me a pair! THANKS MAX!!! First up is the far cooler of the two - the Knight. He uses all familiar parts but in a new color scheme with wonderfully vibrant gold armor. It must be paint because the feather and swan on the helmet were conspicuously tough to get on, so I suspect the thin layer of paint actually made a difference on the tight clearances. He comes with an equally gold sword and the true highlight of the release - a shield with the 40th Anniversary logo printed on it! These colors look great together and especially so as a special Anniversary figure. He's so damn cool! 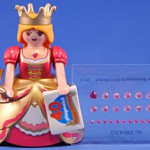 An Anniversary Princess makes since but the gold coloring on her is kind of overwhelming and a bit tacky in appearance. I think part of that is the color pairing with a rich magenta. I would have vastly preferred it if they had carried over the red and blue coloring from the Knight to really cement these two as a pair. There is a pack of tiny jewel stickers, too, to bedazzle her to your heart's content. She comes with a nice crown, a gold fan and piece of paper emblazoned with the 40th Anniversary logo, which is printed on in "landscape orientation" limiting the posing options. Still though, it's that piece of paper/parchment that makes this figure exceptional and despite my gripes I really do adore the company celebrating its anniversary in such a fun way. Again, countless thanks unto Reader Max! 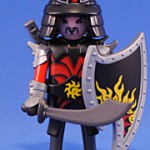 Apparently Playmobil was also passing out the regular assortment of promo figures too so Max was kind enough to grab me one of the Dragon Knights from the recent Asian iteration of the theme. As you might know I've NEVER been a fan of the Dragon Knights as that theme effectively jettisons everything that's good about the Knights theme but this figure is pretty damn cool! I like the colors, especially the subtle maroon shadowing on the torso paint, and the fiery graphics feel historically plausible. He comes with two sheaths for his back which hold two katanas (!) plus he gets a big shield and a new scimitar. The latter is great though it is cast in a surprisingly and uncharacteristically soft plastic for Playmobil. I'm quite happy to have this figure as he seems a great emissary of his subtheme so I can now rest easy having it represented in the collection.

This entry was posted in Four Horsemen, Playmates, Playmobil, Rustin's Spoils of the Week. Bookmark the permalink.

7 Responses to Rustin's Spoils of the Week #138