Once upon a time, Transformers BotBots came with neat little drawings that showed us the mall where the story is set, and where all the stores could be found and thus where each of the 'bots liked to play. But Los Deliciosos were introduced in Series 4, when that process had stopped. And it didn't restart by Series 5, so all we can say is that Tamale Mal is a "two star" figure, so he probably would have been found on the second floor.

Tamales are probably the original American fast food - the name itself 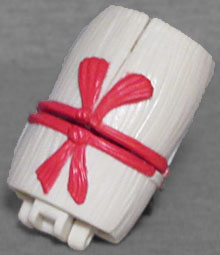 comes from the Nahuatl word meaning "wrapped food." The entire point of them was that they were easy to make, highly nutritious, and easy to transport without going bad in the tropical heat. They were fed to soldiers, given out at parties... from the start, tamales were "to go" food. They're basically just corn dough around a filling (meat, veggies, fruit, whatever) wrapped in a corn husk and steamed. This toy's texture clearly represents the wrapper, not the actual food, with strong striations running along its body. It's got the faded color of an old corn husk, and there's a big red ribbon tied around the middle (suggesting this is supposed to be a bundle of tamales, not just one big one).

BotBots are not intended to be a showcase of complex engineering, which is good news since there are no more instructions to show us what to do. Fold down the lower half to be legs, split the upper half to reveal the body, then fold that down behind the torso.

Tamale Mal brings the wrestling action to the mat and uses his hefty husk to grind opponents into submission! He's feared by luchador bots everywhere for his legendary finishing move: the Triple Tamale Twist, 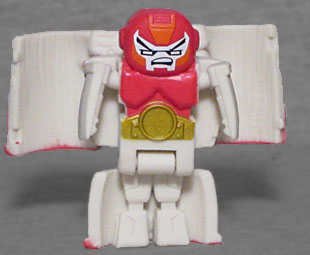 which is rumored to be impossible to escape.

Ha, "Triple," because tamales and typically bundled in threes. Cute. Making the Central American food a luchador is a clever move - the sculpt even provides him with what appears to be a gold championship belt. The white white pattern on the face calls to mind a lucha mask, too, but since so much of the body is white, it ends up looking like a fully exposed face. The robot's legs end up set a little too far back to look normal, but that was probably a requirement to keep the toy from falling over backwards due to all that kibble. His only articulation is balljointed shoulders, but the chest being molded like big muscles still makes him look strong. 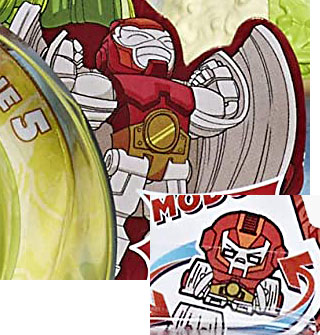 Tamale Mal is a repaint of Series 4's "Lunchador," and is available in two five-packs: one Los Deliciosos, one Frequent Flyers. Although Hasbro still produces art of the BotBots, the website only has photos now. Tamale Mal does get to be the little "two modes" illustration on the Los Deliciosos packages, though, so that's neat.