With the announcement that Horizon Zero Dawn would be getting a sequel (presumably to called "Horizon One Dawn"), the original is probably fair game for spoilers. So consider this your official warning. Ready? Here we go!

HZD is not set in some unthinkable alternate world where humans and robots naturally co-evolved: it's actually set in the far future, where humanity (all life on earth, really) was wiped out by the Faro Plague, which may sound 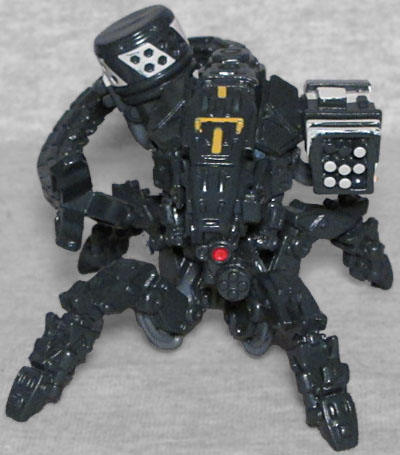 like a disease, but was really the name for a series of autonomous combat robots designed by Faro Automated Solutions; unhackable and capable of using collected biomass to fuel themselves and build more of their own kind, the robots glitched out and were months away from exterminating everything on the planet. Whoopsie! Rather than trying in vain to stop the swarm of bots, the lead scientist came up with Project Zero Dawn: an independent AI system was built that would, after decades, be able to brute force the robots' control codes, shutting them down; once that was done, it would start building terraforming machines to restart the now-destroyed environment. The dormant Faro robots were still around, they'd just been buried by the terraforming process.

The Faro robots are visually distinct from the machines that normally wander the landscape, lacking the white outer shell - really, it looks like something out of The Matrix, like a ground-based Sentinel. This model, 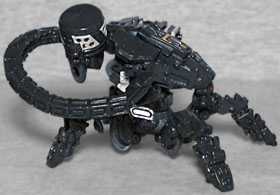 originally known as a FAS-ACA3 Scarab, is called a Corruptor by the modern humans who encounter it. It was an all-terrain reconnaissance unit capable of skitterning through any environment. Long buried in the earth, leaving it weak to heat, it remains an agile, deadly war machine. Patterned loosely after a scorpion, it has four arachnoid legs beneath a pointed body, and a long tail curling around to the side. A square grenade launcher is mounted on the left side of the body, and a cylindrical spike launcher on the right. Once again, the scale is all out of whack: at full size, a human would be able to crouch in the gap beneath the leg.