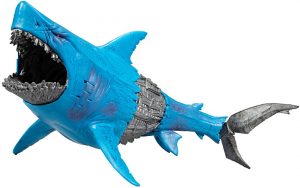 Fren-Z is the king of the ocean - every ocean. He is a mix of robotics and the DNA of a Great White Shark combined with the prehistoric Megalodon Super Shark for extra terror. Fren-Z was created to be the prototype for a new breed of aquatic weaponry. But the dangerous minds at the Robotic Animal Warrior (RAW) labs did their job too well, and Fren-Z escaped. Now he stalks the oceans, an unstoppable hunter - part-shark, part-machine, all-deadly. 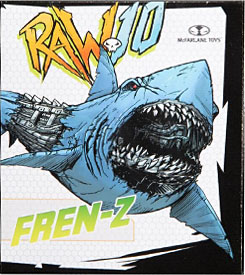 "I took nature's most perfect killing machine, and needlessly turned it into a robot." Bonzer work, Quinn! Fren-Z may have a silly name, but he's easily the best toy in this first series of the Raw10 line. He looks less like a shark with robotic parts and more like a mechanical shark that once had a realistic shark skin fitted around him, but it's been torn away through various battles, so it now goes robot-shark-robot-shark-robot. His jaw opens and closes, and he has three side-to-side hinges in the body, each hidden by the transition from skin to steel. Wiggle him and it looks like he's swimming! 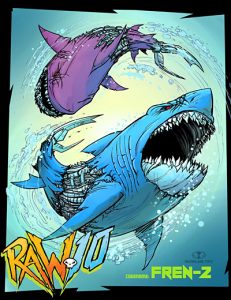 Fren-Z the massive robo-shark, patrols the oceans! His rival, a dangerous Great White Shark/Cyborg hybrid named Finatak, swims in for the attack, But Fren-Z is ready! The oceans are his to command!

Fren-Z is a bigger figure, in a bigger box, so he has a bigger pricetag: $20, vs. the $10 we've seen on the first two. Or rather, $19.87 + tax, thanks to the weird way Walmart likes to price its merchandise. The blue skin is unusual for a shark, but a more normal gray would not have contrasted with the metal bits as nicely. There's even some purple airbrushing to keep him from looking "toyish"! He's been sculpted with lots of nicks and scars, making him look like a fighter, and the mouth is deep enough that you can fit some toys partially inside. EATING!

Each Raw10 release includes a pamphlet that features an image of them and their bio on one side, the bio for the other three figures on the other side, and then unfolds into a little poster of their "comic" art. Fren-Z's shows him swimming with a potential repaint, in purple instead of blue.