Hey, timely! Disney's new live-action Mulan is soundly bombing at the (digital) box office, so let's look at a good version of the character. One who doesn't support concentration camps or the Hong Kong police. She's not a princess by birth or marriage, and yet she counts as an official Disney Princess - must be that medal she received from the Emperor! Or the fact that she has the highest personal bodycount out of any Disney character (hero or villain), so all the rest are afraid to tell her no. Disney's original plan was for a short film called China Doll, about an unhappy girl who elopes

with a British soldier; when they found out about the traditional Ballad of Fa Mu Lan, those plans changed. Their story went through iterations where she was a tomboy looking forward to playing soldier, where she was running away from home to avoid an arranged marriage, or where she had fallen in love with the captain of the guard and followed after him. Luckily, someone figured out that Mulan's story needed to be about her, and so now what she wants is to be accepted for who she is - that she has to take her father's place in the army is incidental to that.

Mulan was voiced by Ming-Na Wen, the first person to complete the "Disney Entertainment Monopoly" trifecta by being a Disney Princess, a Marvel character (Agent May), and a Star War (in The Mandalorian). (Yes, Samuel L. Jackson did it first, if you want to count Pixar, but technically that came out when Pixar was just partnered with Disney, not owned by them. Plus, he's not a Princess.) Mulan's casual clothes comprise high-top sneakers, black jeans, a pale blue top, and a satin jacket with a red body and cream colored sleeves with red stripes down the outside. Definitely a departure from her traditional colors! There are two golden dragons on the chest - Mushu, of course! The actual design had a larger version of Mushu on the back (and also potentially a hood, at one point), but that hasn't been included here. She's looking slyly to the side, and has a smirk on her face. The lower edges of the jacket have been attached to the jeans with plastic ties, so you'll have to cut those if you want her to lend her jacket to anyone else. 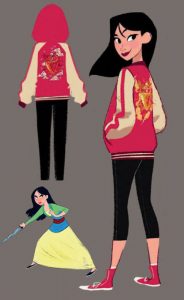 All the Comfy Princesses have the same joints: balljointed head, swivel/hinge shoulders and elbows, swivel/hinge hips, and knees that are ratchet joints inside a rubber sleeve, making the legs seamless. Rubber ankles mean they're very hard to stand, though. The hair is rooted, and shaped to match the style seen in the film; Mulan's isn't "Ping" short, but it's not "Mulan" long, either: clearly it's been growing out! Incidentally, Mulan's habit of playing with her hair comes from Ming-Na in real life. And if you're wondering how someone so feminine managed to pose as a man, her fake name is a clue: she claims to be "Fa (or Hua, in the Mandarin pronunciation) Ping," which translates as "flower vase"; it's also slang for an effeminate man, like if Amanda Byne's character in She's the Man had been named "Homer Sexual." So the other soldiers probably just thought Ping was gay. And now she's something of a trans icon. Way to go, Mulan! You deserve to be comfy.