A Clockwork Orange was cranked out in about three weeks because author Anthony Burgess thought he was dying from a brain tumor. 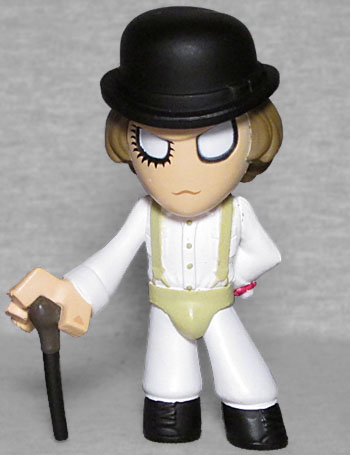 It's entirely unlike his other books, yet is easily the most well-known thing he's written. The book was censored in America - to remove a happy ending - and it's that expurgated version Stanley Kubrick was working from when he directed the movie.

Set in a dystopian future England where teenagers run rampant, A Clockwork Orange is the story of Alex*, a violent, sadistic sociopath who leads a gang of fellow youths. They drink mescaline-infused milk (because they're too young for alcohol) and delight in brutal acts. Their fashion sense is, like all teenagers', inscrutable: Alex wears a bowler hat, false eyelashes around one eye, a white dress shirt with stylized eyeball cuff links, a protective cup held up by suspenders, white trousers, and tall black boots. The shirt and cup were actually Malcolm McDowell's: he'd been playing cricket before a costume fitting, and Kubrick was inspired by the gear.

The figure has a performatively grown-up stance - remember, Alex is supposed to be only about 15 years old, so leaning on his cane with one arm tucked behind his back is more an affectation than a natural pose. The eyebrow ridge is sculpted so one eye is wider than the other. The black paint on his boots ends a little lower than it should, 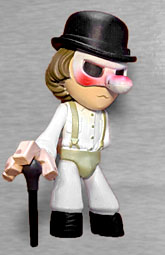 leaving a gap between their tops and the place where the pants are tucked in.

Alex was available in a 1:12 ratio, putting him in every case - you could find him in the front right bottom corner, next to Jack Torrance. When Walgreens got their delayed cases in 2017, there was a variant Alex available - this one was wearing his mask from the home invasion/"Singin' in the Rain" scene. The sculpt is accurate enough, but the paint isn't even close: the real mask was pale pink with red on top of the nose and black above the eyes; this one is white with heavy red on the nose and cheeks, and the only black to be found is in the eyes, not above them. It's like they accidentally copied the colors of Dim's mask instead of Alex. This version was also in a 1:12 ratio.

*most fans think his name is Alex DeLarge, but that's wrong: it's merely a teenager's idea of a clever sex pun. Several newspaper clippings reveal his actual name is Alex Burgess, after the author.