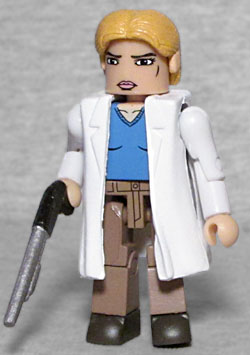 An interior design student before the outbreak, Alice proved to be a quick learner when she assisted Woodbury's town doctor, Dr. Stevens. After his death, she left Woodbury with Rick to be the doctor at the prison.

Technically she left Woodbury before his death. So did he. Or at least, at the same time. The group escaping town went over the fence, and literally the first thing that happened was Dr. Stevens getting bitten. Alice dresses simply, wearing a white lab coat over a blue V-neck T-shirt and khakis. The set includes an alternate pair of arms, which is how we know that's a T-shirt, and the shotgun she uses at the prison. Her blonde hair is pulled back into a thick braid, though not as long as it was in the comic.

Survival tip: any building that can keep zombies out can also keep them in. Be sure to fully sweep any building before locking the doors; you never know 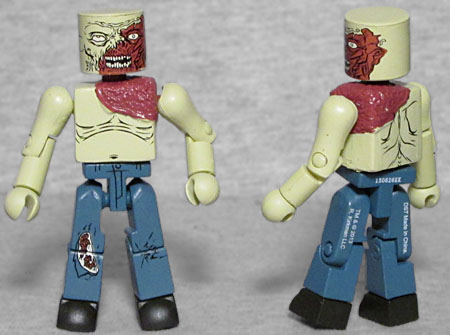 what may be in there with you.

Officially, Alice Warren is the variant figure for Series 4, which means you're going to get two of the zombie she comes with. And it's not even a case like the Farmer Zombie in Series 3, where you could at least create a slightly different look - there's only one appearance. The "Shoulder Zombie" has a sculpted torso, to show the ruinous wound that gives him his name. The matching ones on his face and right knee are just painted, but they still look gross. The Minimate is based on a zombie that appeared on the cover of issue 28, but that leaves a lot of room for extrapolation. For variety, they could have included one of those "missing arm" pieces, since it looks like that may be the case on the cover. 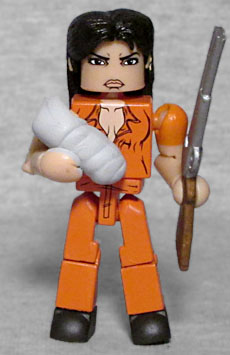 After successfully delivering baby Judith in the prison (with the help of Alice), Lori did not have much time with her daughter before the Governor arrived in force, with the aim of capturing the prison.

If Alice was the chase figure, Prison Lori is the normal one. It's funny for a deputy's wife to be wearing prison orange, but this is obviously from the group's time at Meriwether County Correctional Facility - her old clothes were getting dirty and worn out, so even something as unfashionable as this began to look good. Like the first Lori figure, she still looks angry (the original plan for this arc in the comics was that Rick and Lori were going to break up, but the characters refused to let it work out that way), but her skin

and lips are the same color now - no more wearing makeup in the apocalypse!

This set includes the same rifle as the other Lori, but the important accessory is Judith Grimes. She was just a baby at the time, so this is an alternate hand that's been molded cradling a swaddled Minimate infant. The piece was later reused with Cable and Deadpool, but it originated here.