This is the latest in a series (of indefinite length and regularity) of blog posts memorializing cancelled toys. Our figures today come from Series 3 of Funko's Horror Classics Mystery Minis.

Before Series 3 was released, Funko shared control art of the figures they planned to include; when the toys shipped, however, several were missing. Bride of Chucky's Tiffany became a Hot Topic exclusive, and Walgreens got the Ghostbusters Terror Dog and variant Clockwork Orange Alex, but licensing issues kept two of the designs from finding a home: Carrie, the bloody prom queen, and Norman Bates from Psycho 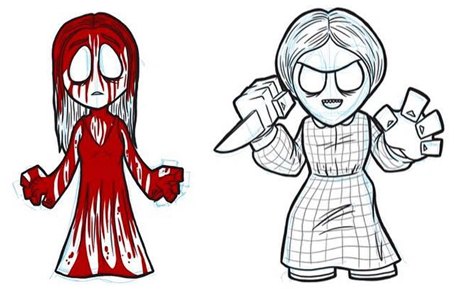 While both those characters have since received POP!s, suggesting the licenses are now available, Funko seems to have given up on the Horror Classics line, leaving these two psycho killers unreleased.

This entry was posted in cancelled toys, Funko and tagged Mystery Minis. Bookmark the permalink.