The first robots developed in the world of Horizon Zero Dawn had some self-dense capabilities, but were mostly peaceful. 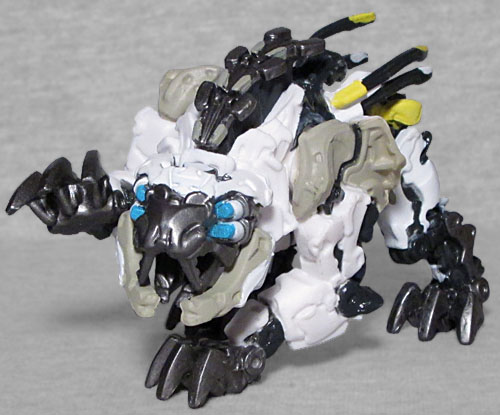 Then an event known as "the Derangement" happened, and not only did the formerly docile machines became hostile, but new, more aggressive designs appeared as well.

Among them was the Sawtooth, an aggressive hunter, quick to close the distance and engage with melee attacks. The first Sawtooth attack took out an entire cohort of soldiers, because no one knew what it was or how to deal with it, leaving a solitary hunter to track, defeat, and name the beast.

The Sawtooth is a quadruped, but with thick, powerful legs 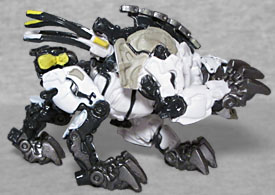 and sharp claws on its feet - definitely a predator, rather than prey. The right front foot is raised to slash at whomever or whatever it's attacking. The body is mainly covered in white armored panels, though a dark grey ridge runs down its back, and four thin antennae poke out above its hips. The name "Sawtooth" comes from the two big fangs in its top jaw - this is a sabertooth! Sure, real sabertooths might not have two pairs of bright blue eyes or yellow fuel tanks on their butts, but its inspiration is clear.