A shape-shifting entity of evil millions of years old with no specific gender or identity from an unknown dimension beyond space, It's proxy form is a spider and if injured, hungry, or resting, It reverts back to this form. 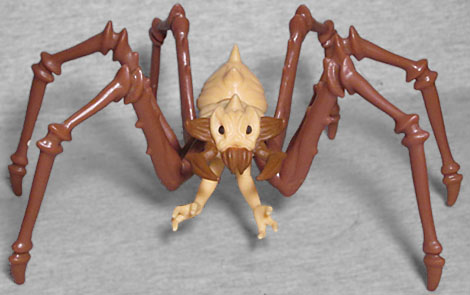 You read that right, this is Pennywise! Ah, the '90s version, not modern. Loyal Subjects, they of the Action Vinyls lines, did a whole horror collection based on Warner Bros. properties: Friday the 13th, Nightmare on Elm Street, The Exorcist, and, yes, It. Since their toys are smaller and superdformed, Loyal Subjects didn't have to restrict themselves to just the dancing clown, which is why we got a Pennywise's spider form. 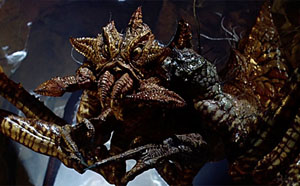 Pennywise isn't an actual "spider," that's just the closest thing the human mind can approximate - that's why the version in the TV miniseries was muscular and reptilian, with hints of an Alaskan king crab in there as well. If you look at images from the movie, you'll see it had striated colors on its skin, rather like the Spider Gremlin; this toy, by contrast, has a pink body an brown legs. How vastly lazy!

The (two) arms and (six) legs are bagged separately 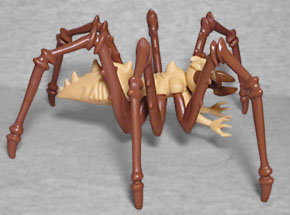 from the body in the box - hardly a surprise, since the full thing ends up about 6½" wide, 5⅝" long, and 3" tall. The sculpt is as good as you'd expect from Loyal Subjects' Action Vinyls, with softened spikes, a few wrinkles, and even distinct abs under the thorax. Although they look it at first glance, all six legs are not identical: there are two where the bend nearest the body is a sharper angle, so they stick up a bit higher; those two go in the back, to help support the weight of the abdomen. All the joints are balljoints, which means they want to pop out when you move them. 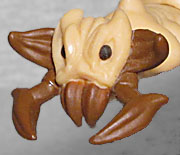 The official ratios for these boxed figures are still a gigantic mess. The Giant Spider (and its glow-in-the-dark variant) are both allegedly 1:48 figures, but I never saw a single case of 12 that didn't have at least two of it. It's very easy to identify, because the legs rattle around in there even if the window on the front of the box is opaque black.

There are a couple Pennywises in this line as well - one with balloons, one with fangs - and any number of store-specific variations, but no one else is making the Giant Spider. The colors are stupid and the joints fall apart, but it's still neat to get Penny's alternate form at last.