Ah, toy stores: how I miss them! How I miss the very concept of them. The Transformers BotBots mall still has two of them, somehow, and that's where the Playroom Posse lives. Pop-O the Clown is at the one upstairs on Level 2. 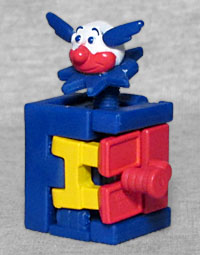 BotBots as a concept: since they're designed to be so cheap and affordable, a lot of corners must be cut. In some cases that means simplifying the intened design, and in some it's the paint. The majority of this toy is blue plastic, including the spring that pops the clown head out and the ruffle around its neck, so all that detail blends together. One side of the box (the one where the crank handle can be found) is red, but the lid is the same blue as everything else, and there are yellow stripes on the front that technically count as robot kibble since the ares around them is the same unpainted blue. This really needed, like, even one more color to mix things up. And while we're dreaming big, make the clown head a removable piece, and make the lid actually hinge closed.

It's always easy to convert BotBots - for Pop-O, hinge the crank back, unfold the legs, and pull the arm out to the side. And turn the clown's face around slightly if you feel like it.

Unlike most jack-in-the-boxes, Pop-O the Clown never pops out at the same part of his song twice. This keeps the other bots on edge for the maximum 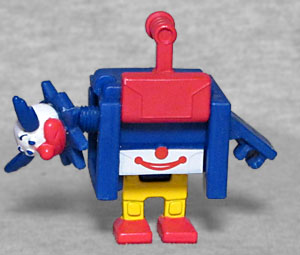 surprise level! Lately he's started popping out at bots from closets and around corners. GOTCHA!

The BotBots clown alley is now up to two. Did you know the collective noun for a group of clowns was "an alley"? I didn't! We'd criticize the "one mode's head becomes the other mode's hand" design choice as uninspired, but people seem to love Beast Wars Megatron, and we don't want to get in trouble. The large, flat feet keep the boxy robot standing securely, and the yellow legs manage to look like silly overalls. While the face is painted white with a big red smile and round nose, there are no eyes at all - just a blank blue space. Again, one more color of paint could have helped that. 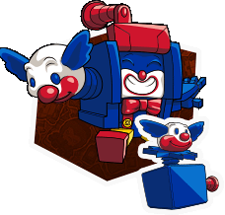 Pop-O the Clown is available in two of the Series 3 5-packs: one Playroom Posse, and one Seasons Greeters.