Babies need attenntion. Stupid babies need the most attention! And apparently Transformers BotBots babies need two stores in the mall all to themselves, because that's what's going on in the east wing where the Goo Goo Groupies live. Bottle O'Tears is down on the ground floor, apparently being force-fed to Nampy? 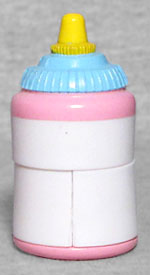 Devices specifically for feeding milk to infants have existed for about 3,000 years. Early examples were fired clay or hollowed-out animal horns, then eventually metal, glass, and finally plastic. The rubber nipple was patented in 1845, but it took several decades before the technology to make them reliably caught up with the idea. The body of this bottle is white, suggesting we're seeing the milk inside it, and there are pink rings around the top and bottom. The cap is a light blue, and the nipple is yellow. All the colors are suitably pale (despite the fact that babies can only discern black-and-white patterns at first, and then bold, saturated colors after that), making this look like something that would be in a baby's collection of personal items.

Bottle O'Tears can't help but cry - all the time. You may think 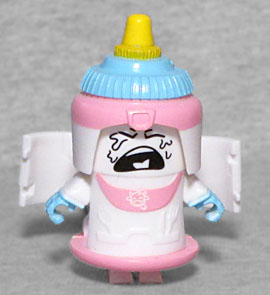 there is no use crying over spilt milk, but he certainly does! It's hard for him not to take the loss personally... sometimes Bottle O'Tears gets upset about crying all the time - so he cries.

Notorious B.O'T.'s face tampo matches his bio well: his mouth is open in a dramatic wail, his eyes are scrunched shut, and tears pour down his cheeks. What liquid is that, anyway? Is he crying his milk out? Will he eventually be empty? The bib molded on the chest works nicely here (with a little cow on it), though they were smart to leave the utensils in his pockets unpainted. There's no articulation to speak of, and getting him to balance with those big wings behind him can be tricky. 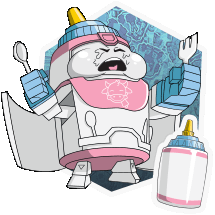 Bottle O'Tears was available in a Fresh Squeezes 8-pack, or two different Goo Goo Groupies 8-packs. After this release in Series 3, the mold was also reused for a bottle of green salsa in Series 4 and a bottle of soy sauce in Series 5.