The Hibotchi Heats were introduced in Series 5 of the Transformers BotBots, which means they don't get art showing them in the mall. Boo! But any Asian restaurant worth its salted fish would have soy sauce available, so finding it wouldn't be a surprise. 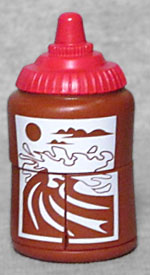 Soy sauce was created more than 2,000 years ago in China's Western Han Dynasty. It's a thin liquid made from soybean paste, grain, salt water, and mold, which has all been allowed to ferment. It's one of the prime examples of "umami" flavor, which basically means "tasty" but is generally translated as "savory." Its color is a darker brown than this bottle shows, but maybe Hasbro was afraid the paint would come out black instead? The label looks like a representation of The Great Wave Off Kanagawa.

BotBots convert easily. Open the panels on the front of the bottle, lift the arms up, fold down the legs, and turn the lid to reveal her face.

Drama Sauce is soy dramatic. She greets each day with carefully choreographed musical numbers about reawakening. When passing other bots 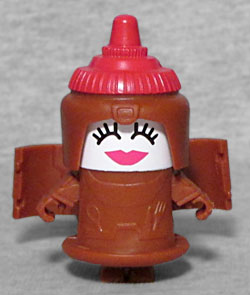 in the mall, she recites theatrical monologues about chance meetings. And she only expresses joy with show-stopping tap dances. To this drama queen, the mall is her stage. And she's going to give the performance of a lifetime...

Oh, so she's Rachel from Glee? Enjoy your non-existent Tony Award, Drama Sauce! Of all the uses of this mold, Drams takes minimalism to new heights. New lows? Whichever. While she's till got the sculpted bib and utensils that come with this body, there's not a drop of paint on them. Or anywhere on her body at all - the hands and feet are the same brown as everything else. Her face is white, with a big red smile that doesn't quite match the color of the bottle's lid, and eyes happily shut, yet still showing off their giant lashes. 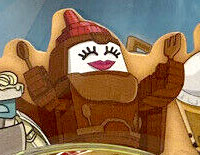