Remember the BotBots' wicked cool gatcha machine? That wasn't the only deluxe pack released ahead of Series 4. There was also a claw machine. 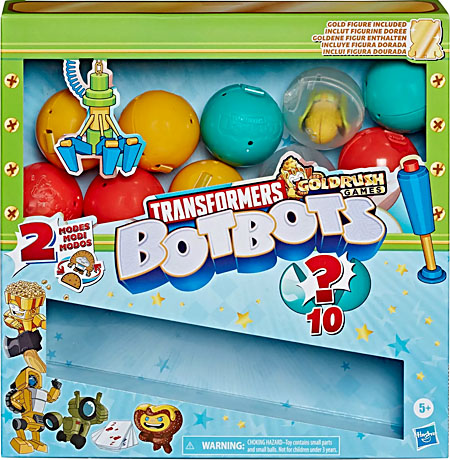 and not nearly as well-designed as the other set? You'd be right. There had to be some way to make them dispense one at a time. But since they can't, we're not doing a mega batch review like we did for the other set. We'll just take whatever the first one out of the gate is and it's... Skitter Chatter from the Magic Tricksters.

You know how when characters in a film or TV show go grocery shopping, 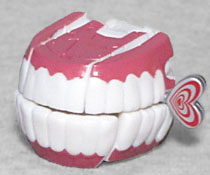 they always come back carrying a single brown paper bag with a loaf of French bread, several loose oranges, and a bundle of celery (to make your panties drop) sticking out of the bag, as a way of quickly communicating the generic "I went shopping" idea? It's not just limited to grocery stores. If anyone in a cartoon goes to a toy store, you're likely to see a jack-in-the-box, some teddy bears, and a pair of chattering teeth. That wind-up novelty was invented in the late '40s and is still around today. This is a classic set, with no googly eyes or working feet. It has 30 teeth (14 on the top, 16 on the bottom) and a silver key poking out the side so you can pretend to wind them up.

Beginning in Series 4, Hasbro stopped providing instructions for the BotBots, counting on their ease of conversion to see us through. Unfortunately, that's also when they started getting a little more complex. In this case, it seems like you lift the top palate, fold the head up onto the top, swing the key to the back, slide that out and tilt it down to become a tail, rotate the bottom molars down to be feet, and spread the top ones to be arms. The photo on the official site is clearly not transformed right, so that's just our guess.

When bots see Skitter Chatter coming, they run in fear. Not because of the creepy way he skitters across the floor or his intimidating teeth. No, what's really scary is getting stuck for hours and hours as Skitter Chatter chit-chats about the weather or how his day was or how the Jock Squad is doing this season. When it comes 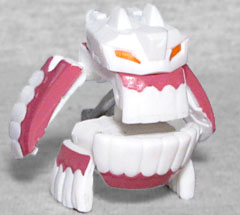 to small talk, this bot has a big mouth.

Skitter Chatter is definitely a weird-looking robot, with a flat, angular head that appears to have two tiny horns on top. That, plus the tail, makes him feel very devilish. Are the four incisors part of his face, or part of his body? Is that a rhino horn on his nose/forehead? The shoulders are balljoints, and the waist is a swivel so you can twist him all around - which leads to a potential alternate bot mode, where the lower teeth are on the back, and the angled section serves as his abdomen. That one looks more distinct, and makes him look like he has insect legs - something closer to designer Bryan Turner's creepy original concept. We need instructions, Hasbro!

Both "Claw Machine Surprise Unboxing" sets include a Skitter Chatter - one has him in a clear capsule, while the other has him hidden.