Last time we reviewed my first villain, so it's only fair that this time we'd review my first hero. If the MotU Minis hadn't been cancelled, the pair of them would have been sold in a single two-pack, which would have been a must-buy! Thank goodness for 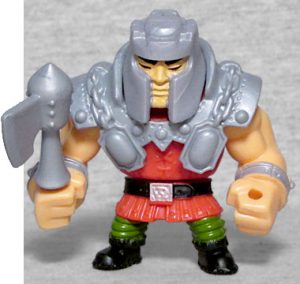 Ram Man is based entirely on his classic version, rather than the Mo2K update - in other words, squared-off shoulder pads and no beer belly. He still has squinty eyes, but that's the style of these figures. His only accessory is his axe, but then, that's the only thing he'd logically have, anyway (MotU Minis each had two, suggesting Trap Jaw would indeed have gotten all three of his arm attachments in their planned pack). It's too bad they had to give Der Rammstein the same squatting stance as all the other figures - his default look has always been "springy green legs together."

Most of the Minis only swivel at the waist, shoulders, and neck. Rammy does a little better, having a balljoint range of motion for his head. The shoulder armor is flexible enough to that you can raise the arms pretty far. Since he's a Series 1 release, Ram-Man is sold in the green Castle Grayskull pod, which is just as accurately detailed on the back as it was on the front.