While MotU Minis Series 2 may have been cancelled, the designs are finally seeing the light of day thanks to the new Eternia Minis line. That's how we're finally 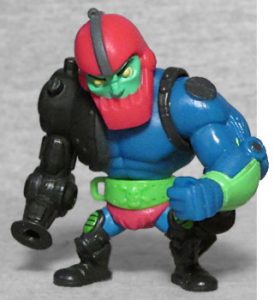 getting my favorite Skeletor henchman, Trap-Jaw! He's one of the earliest action figures I ever remember getting as a kid, so he'll always have a place in my heart.

Trap-Jaw (or "Trap Jaw" as Mattel insists on calling him these days) is made entirely from new molds. The Minis love reusing molds as much as the real line ever did, but he's too unique to share yet. The boots that cover his thighs, the skull-and-crossbones belt, the metal attachments on his chest to support his mechanical arm, the odd plates on his left arm... it's all just him. He seems to be looking farther down than the other figures did, but that does give us a nice view of the eyelet on his helmet.

While MotU Minis never made it to Series 2, Eternia Minis already has. It's an eclectic mix of characters: you've got ones like Beast Man and Faker, who were already in the old line; He-Man and Skeletor, who were just in Series 1; and repaints aplenty. So in addition to Disco Golden Armor Skeletor and Serpent Claw Man-At-Arms, both based on 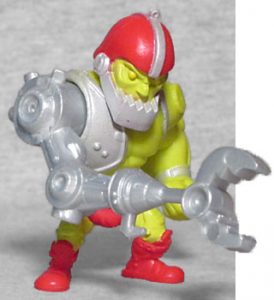 the Mo2K line, we've got "First Appearance Trap Jaw," based on the original minicomic.

This version has yellow-green skin and red clothes. The comic showed maroon, but this is close enough to get the point across. His belt, jaw, and arm are silver. While the Minis from last decade came with two accessories, the new ones only get one, something that really hurts Trap Jaw (since he famously has three different arm attachments). Both versions of the figure come with the same piece: his clamp arm. Since the bare arm can kind of be viewed as a gun barrel, we're willing to bet the 2015 release would have had the hook as well. If you unplug the weapon from the arm, it can be hung on either side of the belt.

The Minis only swivel at the neck, waist, and shoulders. Yes, despite the

shoulders looking like they should be balljoints. While Series 1 came in little green plastic shells shaped like Castle Grayskull (dispensed from a cardboard Grayskull-shaped gravity feed box), Series 2 is in purple ones shaped like Snake Mountain. Neat! It's fun, adds to the display value, and stands out on the shelf when you're walking by, making it easy to know whether to stop and take a look. There are enough unreleased molds still out there to warrant a Series 3 (and maybe even a 4), so what will that look like? "Eternian Tower" blue? "Crystal Castle" pink? We're looking forward to finding out!