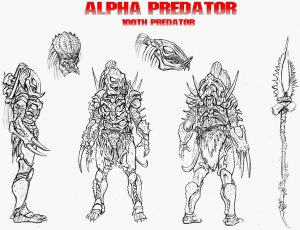 In addition to everything yo reviewed, the set also includes a poster featuring Jason Edmiston's packaging artwork on one side and a visual guide to all 100 Predators figures on the other, as well as an original origin story for Alpha.

Thousands of years ago on a planet far from Earth, ancient Yautja ancestors known as the Hish-qu-Ten (the "Hish") were invaded by the Amgeni, a race of alien insectoids. The Amengi were a ruthless nomadic civilization who, having exhausted their own world's resources in pursuit of technological ambitions, would go from planet to planet like a swarm, consuming anything they had need for and ruling what was left. In these early days, the Hish were generally smaller and more animal-like in nature than their contemporary Predator descendants. Lacking the necessary strength and intelligence to withstand such an advanced foreign attack, the natives were easily overtaken and would be enslaved for many centuries.

The Amengi were cruel rulers, using the primitive Hish for slave labor, food, experiments, and eventually entertainment in the form of game hunting and fighting competitions. Most notable were the fights, which would go on to become especially popular among the invaders. Some combatants even gained followings and it wasn't long until wagers were set on the matches. Gambling was a regular obsession among the upper tier of Amengi society and with more at stake, larger members of the Hish species were sought out, chemically enhanced and trained to become effective tools for earning their owners profit and power.

Well into the Amengi occupation, one of the largest and most fierce Hish fighters emerged, one like nothing ever seen before. Once matured, he commanded respect and fear from even his own captors. Known as Kaail (a term meaning "rage"), this imposing young beast was not only physically impressive for his species, but was also unusually intelligent. Careful to appear loyal, Kaail secretly dedicated himself to regaining the freedom of his people and gradually allied himself with other powerful slaves throughout the established territories. Meanwhile, the Amengi rulers grew so rich and arrogant that they failed to realize the compromising position they'd created for themselves. When the time was right, Kaail - added by his chosen tribe - orchestrated a strategic and bloody insurrection. With their military soft and unchallenged for centuries, the Amengi leadership was usurped within days as they faced the fury of countless oppressed Hish generations, manifested in these brave warriors. Despite the Amengis' advanced technology and tough exoskeletons, no defence proved effective enough against the monsters they'd created. A revolution took place and the occupation was savagely dispatched. When the initial slaughter was over, Kaail took one of the larger carcasses, carved off the external shell, and created body armor for himself, wearing his enemy as a trophy. The others followed suit and a true hunting tribe was formed. These were the first Predators.

Shortly thereafter, the remaining Amengi would be hunted down and either forced into slavery or executed. Their technology, however, would be embraced by the natives and expanded upon for generations, ultimately leading to a perfect balance between the scientific and the natural aspects of Hish/Yautja culture. Yautja history forever honors this noble tale of Kaail the First Hunter, forever known known as the "Alpha Predator." 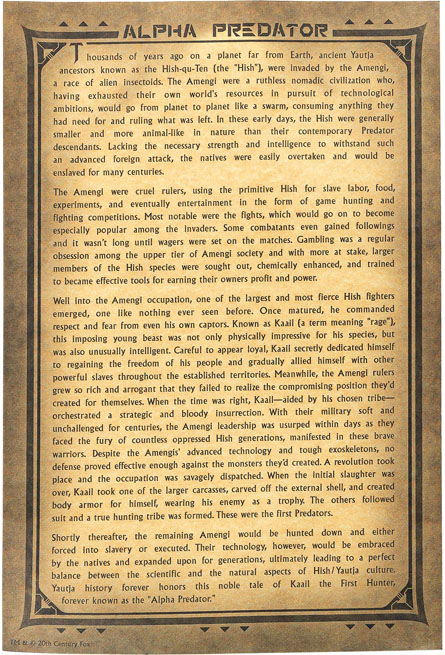 This entry was posted in addendums, NECA and tagged Predator, Reel Toys. Bookmark the permalink.