It's been a month since we last reviewed any Transformers BotBots, so what better way to ease back into the swing of things than by reviewing a toy that is a toy. All the members of the Playroom Posse are based on (non-Transformer) playthings, which is why you'll find them in the east wing's seemingly hedonistic two toy stores! Q.U.R.O.B.O. 6000 is down on the ground floor with Kikmee and Quackules.

When it comes to toys, it's hard to get much more classic than blocks. 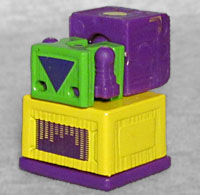 Sure, little caveman kids were probably playing with sticks as soon as they could lift them, but as far as manufactured stuff goes? This stack of plastic blocks has ancient origins. Granted, prehistoric ones probably weren't bright colors like these (and they also weren't permanently attached to each other in a single intended shape), but blocks help kids develop strength, dexterity, balance, control, math, cause-and-effect... they're super useful. This set just includes one large yellow block, one small green block, and one medium purple block, with some decorative elements.

BotBots are fairly basic to convert. Raise the purple block over the green, turn them both around, flip the whole thing over and raise the top of the head. That's pretty much all there is. 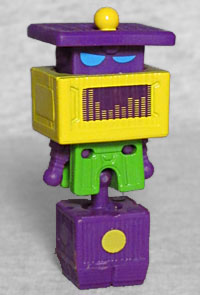 He was once cutting edge - the most intelligent, highly advanced robot in the tribe. Now his programming isn't as advanced as the other bots'. What he can do is so simple a baby could do it.

Thanks to the flat head and the short antenna-knob sticking out the top, QUROBO looks like a professor. Or at least like he's wearing a graduation cap. The way the toy is constructed means the purple triangle that should be on the robot's chest ends up on his back. Also, there are sculpted spots on the sides of the purple one that should be painted yellow, but only the one on the front gets done. His mouth looks like a digital volume readout, and he moves about on little tank treads. The arms don't move out very far, but the waist is a big balljoint, which is pretty neat. 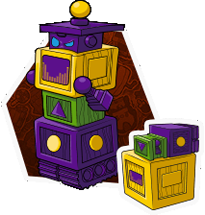