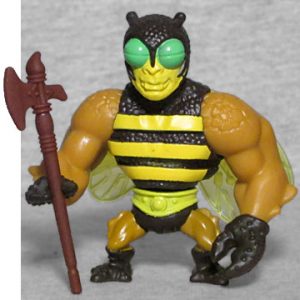 Before Mattel's mis-management led to the cancellation of MotU Minis Series 2 (that pricepoint was a joke), Stinkor was planned to be paired up with perhaps the worst character to face him, Buzz-Off. Bees' sense of smell is 100 times more sensitive than a human's, so he'd be extra vulnerable to Stinkor's stink. Plus bees don't see warm colors, like Stinkor's armor, very well - their strong area is in the cooler range, covering blue-green, violet, and a color humans can't even see called "bee's purple."

Eternia Minis are based on the vintage designs, not the superior "Mo2K" ones, though there wouldn't be a huge difference in the two 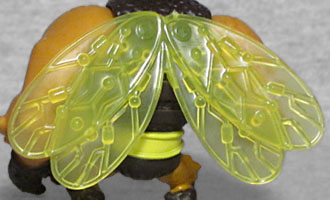 thanks to the stylization - a big bee man is a big bee man, especially since they didn't sculpt any vestigial arms for him. The legs come from Zodac, but the rest of the sculpt has to be new. Clawful had a similar left arm, with scales on the shoulders and spikes on the forearm, but Buzz-Off's simple brown axe has a smaller handle and thus the claw has a smaller opening. His translucent yellow wings are glued into a notch in the back, and are sculpted with a mix of tech and biological details.

The Minis all move at the neck, shoulders, and waist - the shoulders may look like balljoints, but they're just swivels. If you're looking for Buzz-Off, he's in the Grayskull shell stamped underneath with a G.