War is my profession! War is my obsession/
Nothing I like better than a violent intercession!
Blood must be spilled, thick enough to swim in/
As I hear the lamentation of my conquered foes' women! 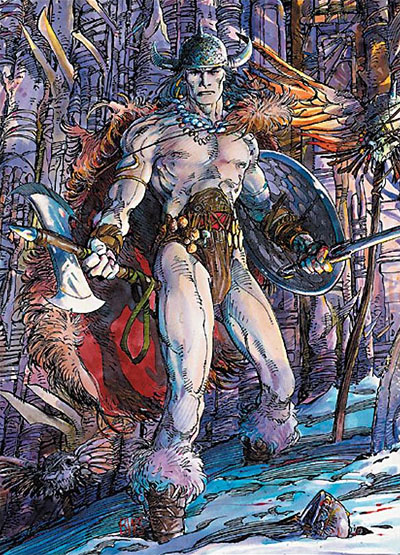 So that's basically Vikor, isn't it? The helmet, the cape, the weapons... it's all right there.

For the record, that's the cover to Conan Saga #1, about which BWS has said:

"I consider this work my definitive Conan. The strange background edifice and the mystical decoration are hallmarks of my early Conan comics stories. The figure itself commands potential for violence, rather than actually swinging a blade or smashing somebody to pulp. I have always preferred the heroic figure in repose or guarded repose: it is the classicism of all mythical figures."

Smith's definitive vision of Conan is almost an identical match for this figure? That should erase any doubt about who "Vikor" really is.