If there's one thing Americans love, it's appropriating the trappings of foreign cultures while still hating the actual people behind them. Asian restaurants? The most popular ethnic cuisine in 24 states. Asian people? Victims of hate crimes. Indian food? The new hotness. Indian people? "Apu." So wherever the Transformers BotBots mall is, it's no surprise Los Deliciosos could call it home. Less likely that the folks who created that food would be warmly welcomed, though. 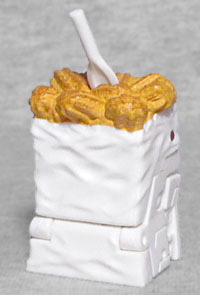 Churros come from Spain/Portugal, and the recipe is pretty much identical to ones found in cookbooks from thousands of years ago. They're sweet sticks of dough, basically fluffier cinnamon-sugar doughnuts, and while they're often served as "on the go" food from street vendors or even dedicated churrería food trucks (making the bag these churros are served in logical), they're also finger-food: you don't need utensils to eat them any more than you do a pretzel, so why does this figure have a spoon sticking out the top of the bag? Were they confused by Cinnamon Toast Crunch Churros cereal? Did they think milk was pored into a paper bag to eat churros? it's weird.

BotBots are easy to convert. To change this one, remove the spoon, lift the top of the bag, fold out the arms and legs, and flip over a panel on the front. All done!

When snack time hits, don't settle for yuck. Just go see Cheero and you'll be in luck. He's got lots of treats and serves with a smile, so a meal here is worth your while. 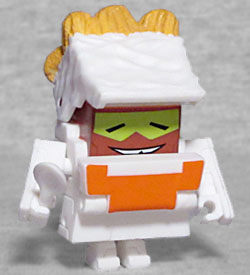 Step right up and jump in line, you'll be chowing down in no time! Located in the scenic food court.

Is he? Good to know, since the BotBots don't come with art showing them in the mall any more. If he's in the food court, and he's a "one star" figure, then we know the food court is on the ground floor. The way the top of the bag tips back makes it look the brim of a hat, and the tan churros sticking out the top seem like hair. Like he's channelling the spirit of Scotty 2 Hotty or something - a comparison not lessened by the fact that his eye visor looks as though he's wearing light green sunglasses. The chest flap obscures the bottom of his mouth slightly, suggesting the paint was applied a little too low. The spoon can be held in either hand. On the prototype, it was orange like his chest; the final thing is white, so it blends in with the body a little too well. 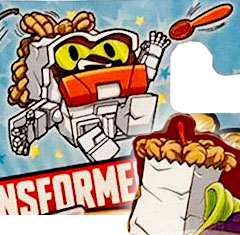 Churro is available blind-packed as #20 in Series 5, or in a Los Deliciosos 5-pack.