GI Joe and the Transformers #6

In today's review of the Sockwave HISS, we said that the packaging was styled like a comicbook, pretending that the GI Joe and the Transformers comic ran for more than four issues. And just like last year, we wanted to show you the story on the back. 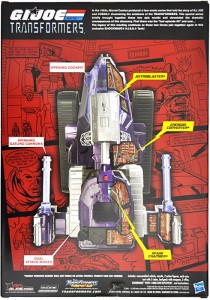 ONE:
SHOCKWAVE stands in the center of a HIGH-TECH BASE, perhaps a Terror Drome. Next to him, DESTRO is flanked by two BATS. A third BAT enters from the far side of the room, pushing a CART FULL OF ENERGON.

1. CAPTION: Two villains make a dark deal to further their own evil plans.

1. DESTRO: Here's the energon you want, Shockwave. Now give me the cash you owe me.

THREE:
Close-up on SHOCKWAVE, as a BEAM spreads out from his single eye.

FOUR:
In a burst of light, SHOCKWAVE transforms into a HISS TANK.

1. SHOCKWAVE: Together we will rebuild Power Station Alpha and take control of the world!

FIVE:
Close-up on SOUNDWAVE, who has been nearby this entire time.

1. CAPTION: Unknown to the two villains, Soundwave is recording this meeting.