With Magneto leading the X-Men, the founding members of the 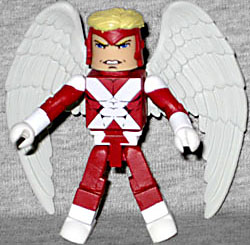 team started their own organization - X-Factor! Angel and the others secret helped new mutants by posing as anti-mutant hunters and hiding their true natures from the public.

By virtue of having feathered wings and a red and white costume, this Angel figure is very reminiscent of "Champions" Angel. The headpiece is even the same! But he has a large X pattern on his chest, matching the rest of the X-Factor costumes (despite the fact that this set came out before the box set). The wings are mounted on thin balljoints, for maximum poseability.

After Thunderbird was killed during an X-Men mission James Proudstar 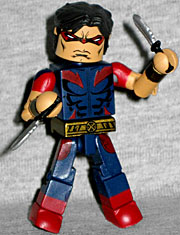 picked up where his brother left off, eventually becoming a crucial member of the team. His superhuman strength and speed are made even more deadly thanks to Warpath's Vibranium knives.

Warpath looks like a very unhappy mutant. He's got a giant scowl on his face, but not yet the teeth-baring snarl X-Force Warpath sported. This Minimate represents Warpath's X-Men uniform, which isn't exactly his best look. The red sections on his torso and legs are too dark - they lack the vibrance needed to really stand out from the navy blue they're set against. They really need to be as bright as the boots and sleevs. He comes with two Punisher knives, but his belt isn't molded to hold them in any way.

This isn't a very good set. If you're getting it, it's just to complete the X-Factor team, because Warpath is entirely forgettable.