The Greaser Gang returned in Series 2 of the Transformers BotBots, again with locations on both the first and second floors of the mall. Today's subject appears to be falling down from one location to the other.

Before it's fermented into wine, the slurry of grape juice and solid remnants (skin, stems, seeds, etc.) is called vinum mustum in Latin ("young wine"). The Romans 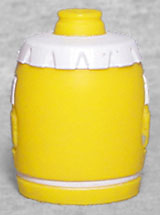 made a hotly spicy condiment paste out of mustum by mixing it with the ground seeds of the sinapis plant to make "burning must" - or in Latin, mustum ardens. Recipes for mustum ardens are found in the same cookbook that also brought us churros, and while those pastries were popular in Iberia, the condiment flourished in Gaul - particularly the Dijon region, where its name was shortened and combined to "mostarde." By the 1300s, that name had been applied backward to the seeds and thus also to the plant, which is why you've heard of mustard but not sinapis. The stuff became a common hot dog topper at the 1904 World's Fair, when the RT French Company introduced their bright yellow blend. And now it sits on restaurant tables everywhere as a sidekick to ketchup.

BotBots are not difficult to convert. For this one, all you do is fold down the legs, flip open a panel concealing the face, and pull the arms out and swing them down into position.

Must Turd is constantly getting into everybody's business. Wherever ketchup goes, Must Turd follows, hoping they'll choose her instead. She's just waiting 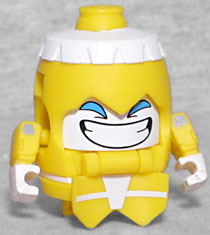 to finally hear somebody say mustard is their favorite.

Oh, honey, no, nobody's going to do that. Unless we're talking honey mustard, and then maybe. Now I usually only ever want to get one use of any given mold, but ketchup and mustard being identical twins makes sense. Plus, there's just something about the combo of red and yellow that feels like it's worth making an exception. Must Turd has a huge smile on her face (despite her unfortunate name), and everything that was black on Fottle Barts is white here: the lid, the hands, the stripe on the bottle and the space on the chest. Silver dots on the shoulders suggest a pin for a hinge joint, but they're just paint. 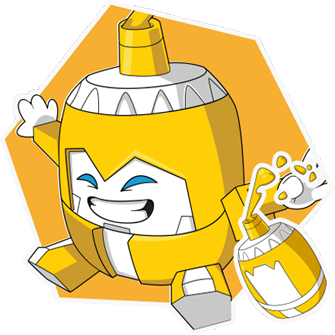 Must Turd was only available as one of the Series 2 blind-packs, #9. So this isn't a BotBot I got incidentally in a pack with others, she's one I had to specifically aim for.