Wing 3 of the Transformers BotBots mall is home to a simply gigantic play space stretching from the ground floor to the roof, because they had a lot of Arcade Renegades to introduce. That means there's plenty of room for prizes and games, with Clawsome being found down on the lowest level.

Well, who ever thought we'd be reviewing two claw machines in one year? 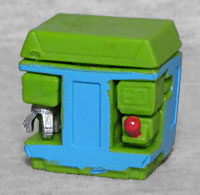 This one isn't as cool as the Roblox version, because that one didn't have to worry about hiding a robot inside. This is basically a box with sloping sides, and the design isn't great. There's a panel showing the prizes inside the machine, but it ends up on the back where you can't see it. That has to be the back, because the joystick is on the opposite side. And so's the claw, for that matter - doesn't seem like a claw machine where the claw is outside the machine would work too well, does it? The front and sides of the machine are blue, like the "glass" on the back, when they really should have been green. This is another case like Pop-O the Clown, where cutting back on paint has lessened the appeal of the toy.

Converting BotBots is simple. For Clawsome, fold down the legs, pull the head up from under the lid, bring the arms around from the back, then turn the joystick around so it's on top of the hand (judging by the placement of the sculpted bump we assume is a thumb.

Clawsome is the most awesome helper in the arcade. She loves seeing other bots get what they want. When bots play her game, they all win the prize they 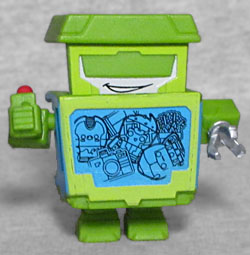 Helping others? Making sure they can get things they need? Regular claw machines may be a Republican metaphor, but Clawsome clearly isn't! Since the back of the machine becomes the front of the robot, we can now appreciate all the prizes that are inside there. Naturally, they're all BotBots: you can make out Grit Sandwood, Point Dexter, the Plop Father, SA Cheez, Stinkosaurus Rex, and Waddlepop (or any of their various repaints, of course). Presumably it's just toys of them, not the actual thems. She's got a single green visor above her broad grin, and the machine's claw becomes her left hand - judging by the official art, it's supposed to be able to fire off like Bionic Commando's, but you'll have to use your imagination for that. 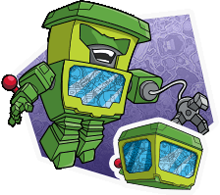 Clawsome is only available in the Arcade Renegades 16-pack - as one of the new molds, she's visible up in the top section, rather than being blind-packed.