Ah yes, the Science Alliance! When you want to buy complex, sensitive, specialized equipment for your high-end experiments right next door to the place that used to be a Zales jewelers, their home in the science store is exactly the place you need to go! It's too bad Hasbro stopped caring about this line enough to pay someone to draw art of the BotBots mall so we'd know what they think a "science store" looks like. 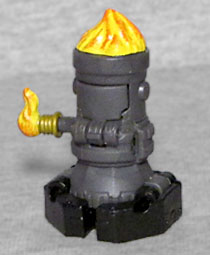 Bunsen burners were invented in the 19th century, to take advantage of Heidelberg University's new gas line hook-ups. Laboratory burner lamps had already been a thing, but these (created by mechanic Peter Desaga based on suggestions from professor Robert Bunsen) worked much better. The devices are usually tall and slender, not short and squat like this one - it needs to be more C-3PO, less R2-D2. A short flame is coming out the top, and a second out the side; since that's either meant to be the place where either the gas or the air goes in, having fire coming out of it is a bad thing. A very bad thing. It's probably about to explode, so get clear.

Not many BotBots are difficult to convert. All you need to do in this case is pull the left arm out, fold down the flap over the face, and flip down the halves of the base.

Doctor Flicker has the brightest ideas. This trailblazing scientist bot's claim to flame 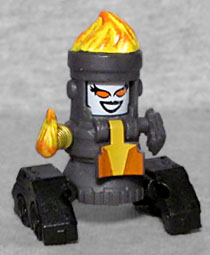 is devoting her days to testing her latest experiments to better bot-kind. When she thinks up a new idea, her fiery hair burns higher. This bot is always in hot pursuit of the next greatest discovery.

With her gun metal grey body and yellow-orange flames, Doc looks like The Fallen's younger sister or something. Having wheels instead of legs is a cool feature, but it has to be hard to science when one of your hands is permanently on fire. They really went all-in on making a feminine face for her, with eyelashes and lipstick - the only signifier we're missing is a bow in her hair!

Dr. Flicker is available in a blind-pack (#17), or two 8-packs (Freequent Flyers or Hibotchi Heats). There's no official art of the character available anywhere - not on the website, not on any of the packaging, not on the stickers, nothing.