The idea behind the Lost Bots is that they're all items who have gotten separated from their teams. So if you look at the west wing of the Transformers BotBots mall, you'll find today's character hanging out in front of the electronics store, despite not being at all electric. 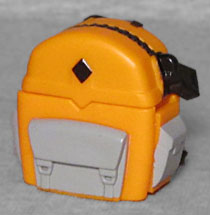 As far as things that might get lost go, a backpack is right up there. You set it down, you wander off, and that's that. This is a quite nice toy representation: the bag itself is orange, with gray pockets on the sides and front, and a black diamond logo up near the top. There's a sculpted zipper with a zipper pull running over the top, plus a hand grip. The back of the pack packs things back with a few black straps and a hacked-up flat slab that smacks of a tacky sack's wrap.

Converting BotBots is always easy. Here, all you need to do is lift the head, and pull out the arms and legs. 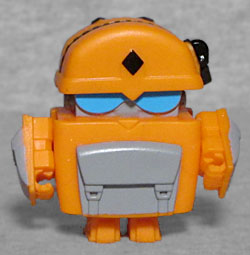 Overpack believes if it could happen, you should pack for it. This bottomless backpack has everything a bot could ever need in case of a storm, blizzard, power outage, Energon shortage, or zombie attack.

The top of the bag becoming Overpack's head makes her look like she's wearing a helmet, like Mega Man's Met. Though the eyes are a single blue visor, the little bump that sticks down in front makes it look like two separate ones. There's no mouth or anything, and since all the body parts emerge from inside the bag, this is a very blocky robot. 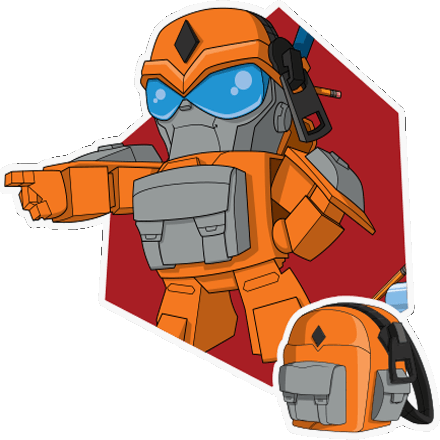 Overpack is available either in a Music Mob 5-pack, or as #23 in the Series 2 blind-packs. The mold was reused to create Excessory in Series 3 and Barf Bag in Series 5.