The Goo Goo Groupies are the "baby-friendly" contingent of the Transformers BotBots, located in two stores in the mall's east wing - one on the first floor, and one on the second floor. But what does that have to do with today's review, which clearly belongs to some group that's all about attending mid-2000s rave parties? 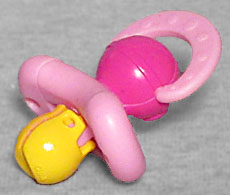 I know some people don't like BotBots, but hey, they can suck it! So can people who do like BotBots, because "it" is a pacifier, and that's what they're designed for. Suckling calms babies, because people get mad if you just give them bourbon, but actually nursing perpetually seems like a waste of time for the mother, so you give the little meatlings a stand-in. This one is mainly pink, the traditional color for boys, and has the modern features pacifiers share: a bulbous teat, a big stopper so the kid can't get it all the way into its mouth, and a ring so parents can grab it.

Converting BotBots is easy: for this one, you simply rotate down the outer edges of the mouth guard, split the feet, open up the arms, and drop the handle behind the head.

Whenever things get loud, the Shushifier quiets them down. He's highly noise sensitive and can detect even the smallest disturbance. If you need total quiet, 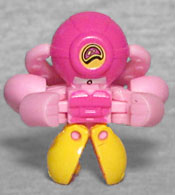 Noise sensitivity? You mean like misophonia? I've got that! I've also got an oral fixation, so this toy, like most stuff I own, has been in my mouth. It's how I hold things. At least this time it makes sense! Shushifier is not a great robot design. The single eye and "shhh"ing lips are cute, but the huggy arms being unable to turn down is uninteresting, and the nipple-feet aren't big enough to keep him standing with all that kibble on his back. You heard it here first, folks: transfans demand broader nipples! 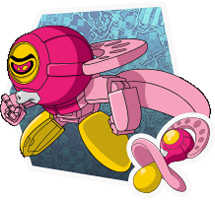 Shushifier is available in a Goo Goo Groupies 8-pack, a Seasons Greeters 5-pack, or in the Series 3 blind-packs as #17.