By Series 4 of the Transformers BotBots stopped giving us charts depicting the mall where the BotBots live, so while we know this little one is a member of the Fresh Squeezes, we've got no idea where, precisely, this one might live. This isn't exactly the type of thing the food court would normally sell.

Avocado toast is, along with Starbucks coffee, one of the things that boomer editorialists, angry at their own pending irrelevancy, like to claim is preventing 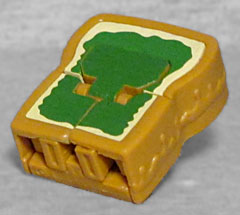 any of the rest of us from advancing economically, rather than the complete failure of end-state Capitalism as a very concept. Which is fine and all, except that no one'd even heard of "avocado toast" until it became a meme representing out-of-touch old people yelling at clouds. It's like they picked two words at random. Habanero butter. Portabello water. Edamame meatballs. Soppressata crackers. Charcuterie pants. For some reason, it's gotten popular to euphemistically refer to guacamole as "smashed avocado," which is what's actually on this bread: there's just a smear of green paint on the bread (on the bottom, judging by the sculpted goo left over from when it was a grilled cheese), not big slices of Avocando's body.

BotBots convert easily. Hiptoast gets it done by opening the flaps around the body, spread the arms a little, pull down the legs, and lower the flap over the face.

Hiptoast was wearing avocado before it was cool. Butter, dude? That's too mainstream. Hiptoast is listening to music you probably haven't heard of 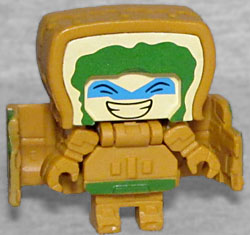 and hanging out at places that are so undiscovered no one can prove they actually exist. No one really likes Hiptoast because she's so smug about being different. That's fine with Hiptoast, the second everyone is into her, she won't be cool anymore.

For someone who's antisocial and unlikable, Hiptoast sure has a pleasant smile on her face. We see why the goop was on this side of the bread now: so it can still be seen outlined around the face. There's also a green paint app creating a little "belt," which is more than Angry Cheese had. Hiptoast still has the same trouble standing up, because the weight of the kibble on the back tries to pull her over. 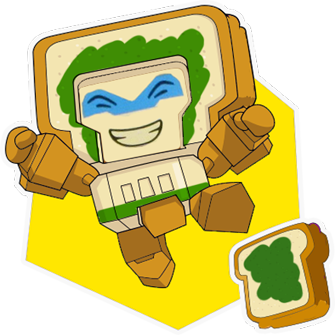 Hiptoast was available blind-packed as #4, a Magic Tricksters 5-pack, or a Movie Moguls 8-pack. The ones in the multipacks have a darker green than the blind-pack version.