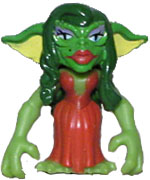 And we end our Halloween countdown with Greta, the female Gremlin. NECA's supposed to be making one sometime, but theirs isn't out yet (as of this writing - it's the middle of January for me, but it's the end of October for you, so she'd better be out by now!). This shows her in her red cocktail dress from the big musical number at the end of the film, though she's missing the feather boa and the flower in her hair. Still, it's nice that some companies aren't neglecting this fan-fave. In their natural pose, her arms hang down lower than her feet, so it's a good thing the soft PVC can flex out of the way.

This has been a pretty fun set, though there are a few things we'd say are missing - the biggest being the Brain Gremlin, the dueterantagonist of Gremlins 2. How do you leave him out? Like, Flasher Gremlin, Veggie Gremlin... those would have been fun designs, but hardly "necessary"; Brain is a major force, and deserved some representation. Ditch one of the plain ones, and give us Brain in his jacket and glasses. Or hey, get rid of some of the slime, that would make things better. Still, with more good than bad, and our first collection of (more or less) in-scale Mogwais, this set was a winner.