A second Masters of the Universe: Revelation series of Eternia Minis already? You spoil us, Mattel! A few of the figures are re-releases or pack-forwards or whatever they want

to call continuing to ship things that were already on the pegs (in what, let's be honest, can rightfully be called "heavy numbers"), but there are a few new ones as well. So alongside a second shot at Fisto and Skelegod, we also get our first version of Teela.

Revelation is a sequel of sorts, so Teela has been redesigned from her old appearance. Quite a it, in fact. For one thing, she's got pants now! Naturally, that pissed off a certain segment of the fanbase (you know the ones), but eh: forget 'em. You don't like your women strong and cool? Get out of the hobby. This is my gate and I'll keep it how I want.

This is not just a plain Teela, however. This is Mercenary Teela, from her "undercover" stint in the second episode. (We'd have given you a spoiler on that, but it's not a secret at all who this character is when she shows up.) 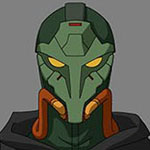 She's wearing a long black cloak draped around her shoulders, and with a hood covering her head. We don't get to see her Rhea Ripley-style good looks! Here's a fun fact for you: the green masks she and her cohort Andra wear while undercover are inspired by the vintage Road Ripper toy. Kind of like how the Fighting Foe Men had armor based on their vehicles. Although the toy does have a left arm hidden beneath that robe, you can't get at it to use the shoulder joint, so she really only moves at the right shoulder and the neck. Her hand is shaped to hold an accessory, but she doesn't come with any.