All the Transformers BotBots love to play around and have fun, but the Playroom Posse even moreso. They're lucky enough to get two "home base" stores in the east wing of the mall, and today's figure can be found on the second floor, dancing with Pop-O the Clown. 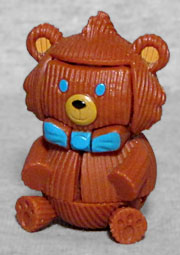 The creation of the first teddy bear is a well-known story: on a hunting trip, President Teddy Roosevelt refused to kill a bear his entourage had hunted, cornered, beaten, and tied to a tree; this show of compassion became national news, and candymaker Morris Mitchom created a soft bear toy and put it in his shop's window as "Teddy's bear." This little gentleman is sitting politely on his butt, with his feet pointed forward to show his paw pads, and he's wearing a blue bow tie that matches his eyes. The body is a reddish brown, with tan for the inside of the ears and his muzzle. The sculpted lines on the body make it look like he's made of corduroy, which wouldn't be very fun to cuddle. The panels that you'll move to form the robot really don't fit with the body very well, sadly.

Converting Cuddle Wuddle is hardly a surprise - the head is the head, the feet are the feet, etc. You simply fold down the legs, open the chest panels and pull the arms out to the sides, then fold down the bear's face to be the robot's chest.

Who's cuter than Cuddle Wuddle? Absolutely no one! This teddy bear 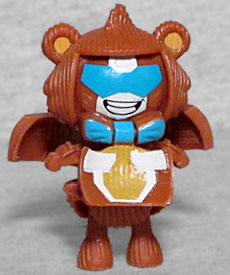 bot is soft and petable and huggable and sooo cuddly! He fills his day with cuddle time, snuggle time, hugging time, and napping time. Now, who needs a hug?

While the conversion may not be imaginative, the bot doesn't just look like the bear stood up. Having small arms revealed after you open the shell helps, as does the flap on the front. I'm not sure if that pattern is supposed to represent clothes or just panels on a machine or what, but since the bear's belly is basic brown and the robot's isn't, it helps them look separate. He's still got his bow tie, but his eyes are now a blue visor, and a white stripe runs down the center of his face behind that giant smile. 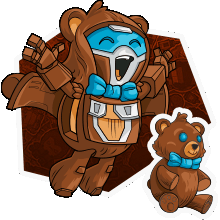 Cuddle Wuddle is available in a Playroom Posse 5-pack, or a Goo Goo Groupies 8-pack.