We're as excited for No Way Home as anyone is, but let's face it: the toy selection is pretty uninspiring. There was a time when the fact that we're getting an interdimensional Sinister Six and a live-action Spiderverse was supposed to be kept under wraps, so Sony couldn't very well have Hasbro soliciting a series of Marvel Legends with old villains and Spideys as early as they'd need to, so instead we get a melange of comic, game, and movie toys. Speed round! 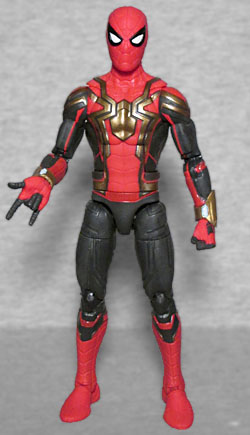 Spider-Man gears up in his Integrated Suit to bravely confront a new threat.

See? They can't even put any pertinent info on the back of the box. "To bravely confront a new threat." You don't want to maybe name that threat? Or even give us a hint of what it is the suit is integrating? We can make guesses - technology from the other Spider-Mans' worlds, designed to help fight their native foes - but that's all.

The design is basically the Iron Spider suit with a couple minor design tweaks: the "legs" on the spider symbol are filled-in with gold rather than just outlined with it, and he has some sort of chunky bracelets on the back of his wrists. There are other changes, but those are the big ones. There's something about the wrist shooters, something indefinable, that sort of feels... "Superior Spider-Man"-y? They wouldn't be planning to go that direction, would they? If they do, you heard it here first.

This figure has no accessories, or even a piece of the Armadillo Build-A-Figure. The only thing we get are alternate thwip hands. With no context and no extras, this is not an interesting action figure.