Hasbro stopped including fun maps of the mall by the time of Transformers BotBots Series 4, so we don't know anything about this little 'bot. If she's anything like the previous Fresh Squeezes, she lives in a kiosk rather than a real store, but that's just guesswork. We know they call her a "1 Star" figure, so she'd probably be found on the ground floor, but that doesn't mean anything.

Have you ever wondered why oranges are considered a Christmas item? 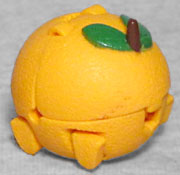 They show up in children's stockings, it's the only time you can get those chocolate oranges you have to smack on the counter, etc. But why? Transportation. Oranges have to be grown in extremely warm climates, and in the days before refrigeration, they couldn't travel very far away from those climates before the started to go bad. But in the winter, when it's colder, it was easy to pack them on a train and send them off to places that normally wouldn't have access, making them a seasonal item. That's the same reason some families still consider a big shrimp platter a holiday staple.

BotBots are easy to convert. For this one, the head folds out from inside a hinged panel on the top, the legs rotate down, and the tail fold out from underneath. Done!

Tricitrustops is loaded with vitamins that give her energy. 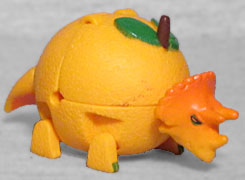 This powerful little ball of fitness fuel is super-charged to the max and roaring to go-go-go! Go really fast! Go round and round! Go through the wall! Ooops.

"Tricitrustops" is not as smooth a name as "Trisourtops" was, and the change in colors isn't doing her any favors, either: the stem is brown, instead of being the same green as the leaves, which is a nice upgrade, but this is a paler orange overall. Then the dino's neck frill is the same orange as the previous figure, and the black eyes are painted larger this time. 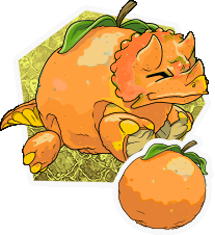 Tricitrustops is available in two 8-packs: one Movie Moguls, and one Wilderness Troop.