Marvel Zombies: who started the plague?

Today we reviewed the Marvel Zombies Daredevil and Giant-Man exclusive Minimates. Have you wondered how the zombie infection got started? Well, the initial story in Ultimate Fantastic Four #22 merely credited an unnamed superhero from another dimension, who was so hungry he actually punched a hole in the fabric of reality to find more prey. Yeah, harsh.

Anyway, that scene was eventually expanded upon in Marvel Zombies /Army of Darkness #1, where we see the Sentry defeating the Avengers. But the Sentry shown there doesn't really look like our Sentry - there are a handful of small differences. It was nothing major, nothing you'd immediately notice unless you were looking. Here's the UFF scene in question: 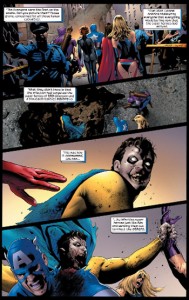 And in Marvel Zombies/Army of Darkness #1, the picture becomes much clearer: 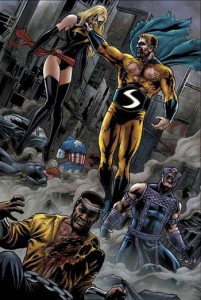 Pretty straightforward, right? Sentry's killed the Avengers, and they're starting to come back to life. But what's not right about the scene?

Well, the most obvious difference is that Sentry has short hair. He has been portrayed like that in the comics before, but only rarely - he's usually got hair down to his shoulders. But that's just a minor thing that could be chalked up to the whole "alternate dimension" thing. There are some artistic quirks, like the missing blue patch on his throat and the fact that it looks like he's wearing separate trunks, but again, those are explainable. A coloring mistake and overzealous inking.

At face value, everything adds up. But if you stat thinking about it, things get hinky. Try to imagine the art in black and white - ignore all the colors. Look at the shape of that guy, floating there with his cape blowing behind him. That guy, with the short hair and the very specific rip in his costume. Mr. Fantastic didn't say it was the Sentry who started all this, he said it was a superhero from another dimension. One with powers apparently similar to the Sentry's, a hero Reed was familiar with.

Think about that for a minute. A cross-dimensional version of the Sentry? Any names spring to mind? Take a look at that image again, and you can see how a few last-minute art tweaks and the work of the colorist could switch things around under editorial mandate. It's cool to play around, but maybe this was just too close for comfort, necessitating the switch?

And that's the second take on the scene! In UFF #22, it's even more blatant! At that point, it was only the coloring that said it was supposed to be the Sentry. Shift the blue and yellow down the spectrum a little bit, and you can totally tell what the real story was supposed to be, before editorial interference: 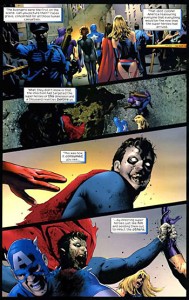 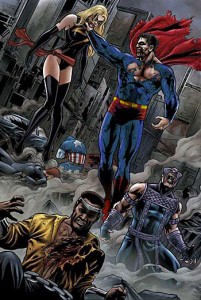 It just looks more "right," doesn't it? So I posit that the original plan was to have the hero from the other dimension be Superman, but without it ever being mentioned or referenced in any way other than the art. But the lawyers got skittish, and insisted that the colors be changed to something Marvel already owned.

And as for the "full body" appearance, it's awfully convenient that the ripped part of his costume is the exact size and shape of Superman's S shield, isn't it? Like the artist was playing with the original intention...