In today's review of the DC Universe Series 8 Parademon, Poe hinted at something special going on with the figure's accessory. What was it? 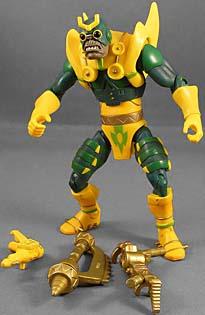 It all goes back to Kalibak. Kalibak's signature weapon is his Beta Club, which Kirby usually drew as little more than a golden, mechanical-looking club. When it came time to add Darkseid's ill-favored son to the 1980s Super Powers line, the Beta Club was given a more unique design. Mattel and the Horseman had hoped to include both the comic-accurate Beta Club and the Super Powers version in Wave Series 6, but when that didn't cost out, the Horsemen - with the help of Mattel's Bill Beneke - came up with a plan to work the SP Beta Club into Wave Series 8. As the Horsemen described on their website:

"We can't take 100% of the credit for this. Sure we planned the weapons to work out this way, but Bill Beneke over at Mattel oversaw the whole project and made sure that the production of the weapons went the way it was supposed to so they were interchangeable. It's hard to explain how difficult that would have been for Bill, but let's just say that the Pantographing of those items must have been a nightmare."

The results speaks for itself. The Horsemen, Beneke and Mattel have come up with an ingenious way to give fans this little treat. Basically, the SP Beta Club rests in a cradle that can be held by the Parademon, creating a unique (and very Kirby-esque) new weapon. However, the club can of course be removed and given to Kalibak.

But wait, there's more! Remember the yellow pistol? Well, if you look closely, you can see it was directly inspired by a blaster from a Kirby pin-up of Kalibak - and it even includes a peg so it can be attached to Kalibak's belt. 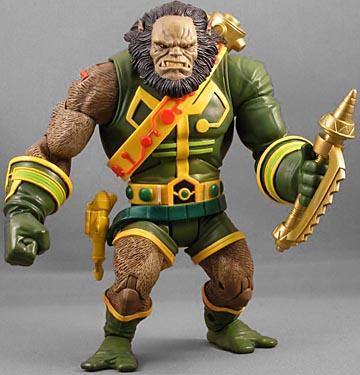 This entry was posted in addendums, DC, Four Horsemen, Mattel. Bookmark the permalink.