The end of Wizard magazine 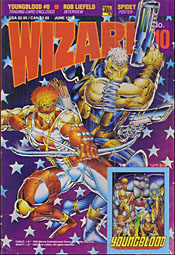 So I woke up this morning to the news that industry mainstay Wizard magazine was cancelled, and it's hard to decide whether the news was shocking or inevitable.

Wizard was founded in 1991, well before the rise of the internet - in other words, back when a monthly magazine about comics was actually a feasible venture. The first issue I ever bought was #10, because (like I've said before) I liked Rob Liefeld. I bought it at a local newsstand, which is a delightfully quaint idea in these days. I bought it religiously through high school (by then I was working in a comicshop, so no more newsstand for me), but gave up on it in college. I bought it sporadically over the years, but the last issue I got was #137 - eight years ago.

Before the internet, Wizard mattered. They were the kingmakers. They covered the comic industry in a way no one else did. Sure, there was Comic Buyer's Guide for dry commentary and veiled insults between creators who overvalued their own relevance, but Wizard was actually engaging and fun to read. They were often accused of inflating the demand for some comics, but that's not true: it was the buyers who drove up the prices; Wizard merely reported it. They were accused of favoring superhero comics, but let's be clear - the backbone of the comics industry is superhero comics, and anyone who says differently doesn't understand things like "reality" or "which number is bigger than another number." Besides, Wizard did more to promote indy comics than anyone else ever did.

Wizard inspired their fair share of imitators. Hero Illustrated, POWER Magazine, something called Combo, apparently... they all tried to copy the formula, and none of them lasted. Why did Wizard last two decades, when the others didn't seem able to last two years? I don't know. At its best, Wizard sold the idea of comics - all comics - to anyone who would listen; at its worst, it treated its readers like horny 12-year-olds. Apparently Wizard has been really good for the past few years - but of the dozens of comic- and toy-fans I know both online and in real life, I only know one person who actually reads it. Which is why the end shouldn't come as any surprise. It also explains the sales numbers.

The latest word is that Wizard is going to become an online magazine - and a publicly traded company, which seems like a weird choice. Wizard has never been very good at online stuff, so trusting their future to that is a shaky proposition - especially if they're going to have to answer to shareholders.

Sadly, this is the end of an era. And while the first news was that our once-beloved ToyFare would be fine, it's cancelled, too. It had severely declined in quality lately, but we're still going to miss seeing it on the racks every month, and I'm honestly a bit proud to say we managed to be in there before the end. Best of luck to the staff of both magazines, and if you guys can make a website that matches the quality of your publications when they were at their peaks, I know I'll be reading it regularly...

This entry was posted in commentary and tagged ToyFare. Bookmark the permalink.

2 Responses to The end of Wizard magazine