Chris "George Kirk/Thor" Hemsworth came to C2E2 today as sort of the headliner for the whole show. May not have the most fan interest yet (why do people like Eliza Dushku...) but certainly he has the most "heat" out of every guest at the con.

I took brief notes during this Q&A panel and present them here for your indulgence now. 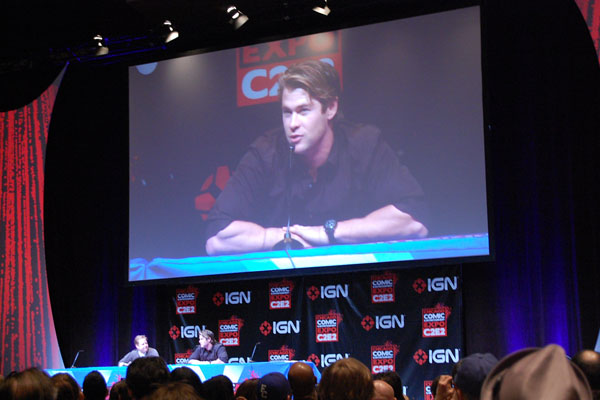 Hemsworth moved to the US 4 years ago and is in Star Trek, Cabin in the Woods, Red Dawn, Thor.

Thor is a sort of fish out of water story, entitled character and humans not having it

When he and Anthony Hopkins walked out on set in full costume for the first time, Hopkins looked over each other's outfits and said "no acting required on this one, is there?"

When asked "how does the film rectify a god living in modern earth?" Chris avoided the direct question and focused on the "human element" of the characters.

"Was there any trepidation about signing on to so may projects at once?" "Uuuuhm, nope."

Cabin in the Woods and Red Dawn are both MGM films in distribution on hold because of the bankruptcy.

Cabin in the Woods, written and produced by Joss Whedon, is pretty secretive and he cant talk about it. He had heard it described as "Truman Show meets Night of the Living Dead" though.

Thor was a 3-4 month of casting process. He didn't know character before reading for the role. The casting process was during the filming of Cabin in the Woods. Joss was asking Hemsworth about Thor and he had auditioned but hadn’t heard anything in a while. Joss called Branagh, though they didn’t know eachother and recommended Hemsworth to Branagh). So naturally Hemsworth is happy Joss is doing Avengers.

Red Dawn follows the original's plot closely ("no parents and lots of weapons") though it focuses personal relationships closer, especially that of the brothers.

Read for JJ on Trek on a Friday, got the part in that meeting was told to show up on Monday for filming.

Charlie Sheen was unavailable for advice on Red Dawn.

If he could also play another superhero it would be... an audience member yelled He-Man and Chris agreed.

He used to dress up as Robin as a child and played around the house.