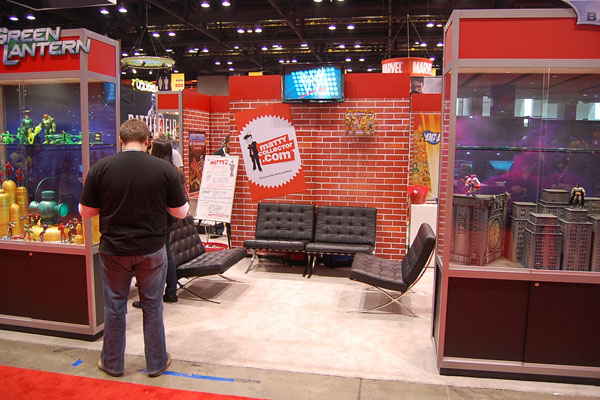 God... Mattel fundamentally does not understand that we are adults do they? But yeah - that's "Matty's Basement" mentioned in all of the press releases. Two chairs and couch that are barely used because people cant rightly tell if they're for attendees, employees or display.

Mattel offered three non-exclusives for sale, 3-packs from JLU available here before distribution out to stores. Not sure how Target feels about that or what kind of distribution they'll get, but at $20 each its pretty much break even for collectors these days. Yeah, I got a set.

Looked better in person than I expected so I may be getting these. At the "Methods & Mayhem" panel Danielle said these are 4¼" so that they and the Hall of Justice, etc., will fit in with JLU. Um... what about the highly stylized look of each line? And I appreciate the idea of that shared scale, but I'd far rather see these at 3¾" or maybe even 4" than 4¼"

6" Red Arrow was unveiled, but I didn't get a chance to ask about ask about the different paint decos between the 2-up and the 1:1, nor the price point. Considering the accessories and bases, it's not going to be pretty. The 6" figures also look smaller than I expected in person, but I'm guessing that's because they're "teen" sized like the DCUC16 Robin.

No interest so I didn't even bother. Sorry, kids.

Cool new figures, but we're already getting to repaints and re-releases in Series 3. Wouldn't be Mattel if they didn't skimp on the tooling.

Okay, so here's some good stuff. First up, let me give you the world premiere of the silhouette for the movie version of the Parallax Entity! 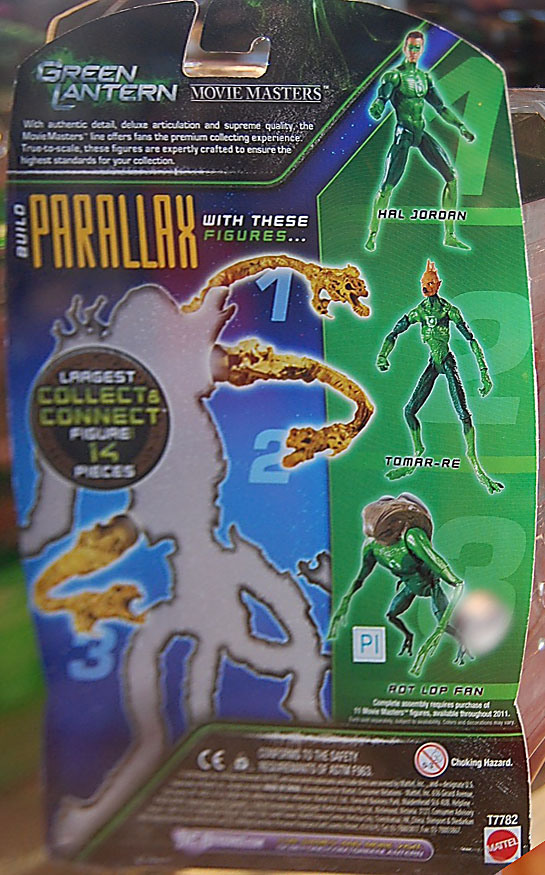 I also got a chance to talk to Mike, a designer for Mattel and he told me some really stuff that's either really juicy or completely off base (I'm tempted to assume the latter since some of it conflicts with everything I've read from Toy Fair and seen on pre-order websites).

Parallax will be 15" tall or more (he just held up his hands, didn't give a number), its the tallest BAF CnC they've ever done. A lot of the limbs will be bendy rather than articulated and the whole piece will have translucent elements. It'll also have two interchangeable heads! The studio didn't have a finalized design for Parallax when they need to start their production cycle, so the Horsemen worked with the filmmakers to finalize the design as they sculpted the figure - pretty cool.

Mike did say the Movie Masters series would include non-Lanterns in future waves, but they wont be doing "Pilot Hal" or anything, those kinds of "real world" variations will only be in the 4.25" line. I asked him if Hector Hammond would be in the line and he was evasive. I asked what non Lanterns we would see and he said, (inviso-text for possible spoilers)

Yellow Lanterns and Red Lanterns. He did at one point mention Yellow Sinestro. It would make sense as a cheap and easy repaint but be a bummer if that costume is in movie 1. Having read "Secret Origin" I could see Atrocitus appearing in the film, though.

The 4.25" line is going to be available in multiple formats, for instance single cards and multi-packs (3 and 5 figure sets) and Mike said that there would not be duplicates throughout, so at least repaints in the box sets. We'll see... The single-carded figures each come with a GL ring. Target gets a series of translucent, light-up figures (Hal, Abin Sur, Sinestro) and Wal*Mart gets a wave of GL/Guardian two-packs, and the Guardians will come with alternate heads in those sets (he made it sound like they'll be packed with two interchangeable heads like the characters in GLC). The Guardians will come with a little hover base too.

He also said that Batman Legacy would be 4 to 5 figure waves, and that the videogame figures would only be available on single cards, not in two packs. So again... what?

Regardless of the confusion, it was a decent booth and having toy companies present is always far better than not, so it was nice to see them there. The GL stuff looks really good in person, so I'll probably be buying into that expensive nightmare.