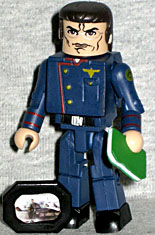 Admiral William Adama was given command of the Galactica as a way to ease into retirement: the ship was a relic, about to be turned into a floating museum. The only reason it wasn't destroyed with the rest of the fleet was that its computer systems were outdated and couldn't be hacked when Baltar gave over the codes. The likeness on this figure is really impressive, especially considering that there's no way for a smooth Minimate head to really duplicate Edward James Olmos' crazy-textured face. He's wearing his glasses, but since they're painted silver, they only show up under certain light. He's got two accessories: a green book, and a black photo frame with a sticker showing Adama and his two sons standing in front of a Viper. The ship, not the Cobra soldier.

Adama's partner in this set is his best friend, Saul Tigh. Col. Tigh was a drunken old bastard with a hateful shrew of a wife, and yet was inexplicably one 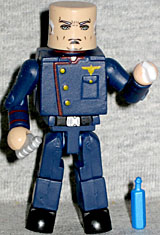 of the most popular characters on the show. His likeness is good, but actor Michael Hogan's head doesn't translate to Minimate shape too well, so he looks too fat. Tigh gets the same add-on costume pieces as Adama: a little belt and a new chest cap to create the uniform's jacket. It has sculpted buttons, piping and pocket, and a gold symbol painted on the chest. There's a gold symbol on the left shoulder, and two red stripes on each wrist. The figure gets a new left hand, sculpted holding some unidentifiable white object. Well, unidentifiable at first; it's actually a hand of cards, since he liked to play poker. Space poker. ["Triad" --ed.] The set includes a replacement hand for those times when you don't want him gambling, as well as two more accessories that are perfectly suited for him: a hexagonal blue bottle of booze and a silver flask.

Admiral Adama and Colonel Tigh aren't great Minimates - Adama's glasses should be painted better, and Tigh's head doesn't suit the Minimate style - but they're important ones if you want to build a BSG collection. They're ones you're going to get no matter what, and by that measure, we can be glad they're as good as they are.