Rustin's Spoils of the Week #53

It's the return of Hotel Spoils - huzzah! Work has me traveling but good once again which steals me away from the most delightful of all lightboxes - hence you get a pleasant faux-marble countertop for the ubiquitous photos. However, while the business of business keeps me from my photo-y comfort zone it certainly offers no shortness of haulage - behold, for yourself, the Spoils of a life on the road! 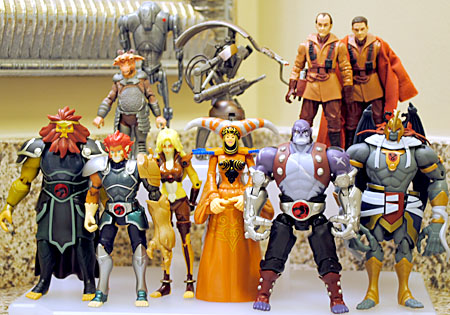 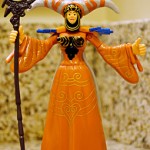 Mighty Morphin' Power Rangers was my gateway into adolescence. It was the first franchise I remembering thinking was "clearly just for little kids," but it still had enough to draw my attention that I couldn't just turn it off once Batman: The Animated Series was over. It was really the first thing I watched "ironically," and eventually led to the realization that I didn't have to watch every show in the Fox Afternoon block and was soon excised from my schedule. So, while I have no real love of the property, MMPR does have a strange nostalgic pull for me and thus I own this remarkably weak figure. It's like they tried to make some Dark Crystal villain but horribly failed - and that was before they even put her in a Cone-Bra! The figure has a swivel neck, balljointed shoulders and swivel elbows. Her collar comes packed separately and plugs straight in horizontally to her neck, rather than more vertically as on the actual costume/actress photo on the package. Some things like the staff and collar have great sculptural detailing, while the face and cloak are remarkably poor. This is, in all reality, only a novelty figure, and just barely worth the $5 I paid for it on clearance. 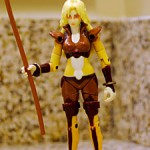 Sooooo I know I swore I'd never get any more of these figures, but they were on sale for $5 a pop! And it was the new series, which I had only just seen from Toy Fair. Plus I was exhausted and needed a pick-me-up purchase-rush. Whatever - don't judge me. Cheetara is definitely one of the better sculpts in the line, and I especially like the delicate features of the face. She is also not as much a disappointment as my previous purchases, though she is nothing special. The staff is, of course, the most warpable of all plastics and the articulation is plentiful but confusing. There is no ankle articulation meaning the leg articulation is fairly useless, but more confounding is her double thigh joints. She gets a swivel cut just below the V-Crotch and another at the top of the mid-thigh band so you just end up with this horrible section that has enough of a subtle angle at the top that you have to constantly swivel it around to find the right look. Annoying as all heck! 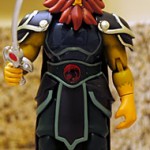 The only new character in the line and he's pretty neat. A nice bulk to him and a good design that really follows through on the look of modern Lion-O. The face paint is sloppier than one would hope for but not much worse than I've come to expect from Bandai. The sides of the skirt are hinged so that they can swing out for better leg posing, but (and get used to this as it's a horrible trend on these figures) the lack of ankle articulation makes that fairly pointless. And of course the Sword of Omens is comically warped due to that awesome Bandai QC we've all come to lament. Still though, for bulk and design I like this figure pretty well and would recommend him, but only if you're already interested in him. 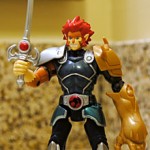 There is little improvement over the first Lion-O save but for a new head and wicked cool new gold armor for his left arm. While I was pretty unhappy with the first figure of him, the new gold pauldron and awesome oversized glove go a long way to improving his cool factor. I just have a thing for oversized, Borg-like arms and this thing fits that to a T! The glove is interchangeable with an alternate left hand, and included are the Sword of Omens and its dagger version (though the latter cannot fit into the new mecha-glove as with the previous iteration). If you get one 4" Lion-O, make it this one. 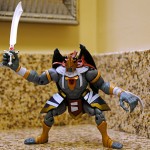 Bad guys are the best, and Mumm-Ra certainly scratches all the right itches! I dig the sculpt, especially the oversized hands, but the head is just ridiculously too small (plus the bandages make it too difficult to turn). Unlike the deluxe version of the figure he gets tiny little folded up bat wings, which can unplug from his back, and while I like the idea of Mumm-Ra with wings, these just make him look silly. The biggest detractor, though, is the seams in the bandages that wrap his skirt. Since it's three pieces they're just gaudy reminders of Bandai's low concern with aesthetics. I thought the sides of the skirt where hinged like Lion-O and Claudus' but in reality they are simply just held in by pegs. In fact so is the front piece - and yes, they are all removable so that you can have "Party Mumm-Ra" were you of the mind. 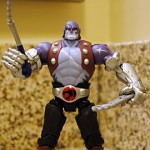 Not the Panthro I would have preferred but needed him to complete the cast so went with it. I don't get nor like the giant metal gloves, which aggravatingly lack wrist articulation, but what are you going to do? He comes with his nunchuks in sculpted attack mode and not-in-use mode (I assume it's the same pair though they aren't painted and don't include the claws), the latter connects to a little hole on the back of his belt. I haven't seen the show yet, but everything about this figure says "Oh hi, I'm Jett from Cowboy Bebop." Subtle. 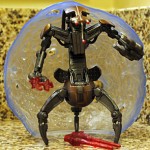 Why don't we call them Droidekkas? The Nemoidian's seem pretty clear on the name and Obi-Wan's one reference to them as "Destroyers" seems more of a nickname. I guess its all just part of the "The Phantom Menace doesn't really count" mentality (not that I'm arguing it should). This figure is a repaint of one from '07 (which itself may have been a repaint, I think) and it offers three things to like: it's the most accurate sculpt Hasbro has done so far and more importantly it comes with laser blast effects and it's shield bubble! Not only are they cool translucent pieces they are all stellar diorama fodder and great solutions to adding accessories to accessory-less characters. While I do really like the release, and hope to score at least one more of these Walmart exclusives, I am none too crazy about the overly silver paint job on the Droid. 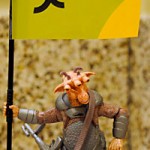 This guy will see a release in the standard Vintage line later in the year but Walmart gets him first in their exclusive "3D" packaging. Of course, the most shocking thing about him is his size - a dwarf Malastarian!? It of course makes sense for the internal logic of Pod Racing, but with never having seen him in any contextual scale plus knowing only the other Malastarians the size comes as a shock. He get's a rifle and a logo Flag to make up for it though. Like the other modern Pod Racers he gets balljoints just about any place they could fit them, however the neck is filled in too fully so it works mainly as just a swivel joint. I think this completes the Pod Racers and I am quite pleased of it. 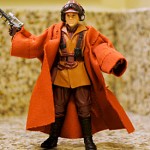 Oh how I have been waiting for a revised Naboo Pilot! It's been 13 years since their only previous release and this is a very welcome upgrade. Nice sculpt, clean paint and the chance for much reuse. I especially like his "goggles up" helmet, which is actually one piece cast in clear plastic then all but the lenses are painted. He gets a softgoods coat, which is a nice inclusion but it's the bad kind of softgoods (too billowy) and it would be nice were it able to fit under the lapels of the sculpted jacket. I really only have one issue with this figure and that's the coloring. Both jacket and coat are too dull in color and should be a bit brighter to not only be film-accurate but also visually appealing. Now that we have the body, though, here's hoping we get some more of the pilots from the film to pad out the Naboo resistance. 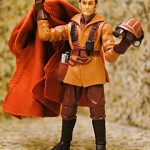 At last, Ric Olie returns! And sadly, it is wholly un-impressive. Save but for the head and goggles-down helmet he is identical to the generic Pilot, which is fine, because this character is all about the likeness - but it is not a good one. Ric was played by Ralph "I had to beat them to death with their own shoes" Brown and this looks as much like him as it would any middle-aged Brit. Still though, he's a true Walmart exclusive and a must-have for that alone. Maybe in another 13 years they do a third one and finally get it right. 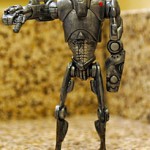 This Vintage one marked down to $4 made it a worthy purchase, but I kind of regret it. It's wholly silver, without any hint of blue, which is pretty inaccurate and is a repaint of the burning one from '07. While they've filled the peghole in his chest you can still easily make out the seam when it's in hand. He gets balljointed shoulders and a swivel peg at the top of the elbow, but really, really needs one on the bottom. Included is a tiny blaster which can only be held in the same hand that has the two built-in lasers protruding... talk about redundancy! Plus those lasers are just sculpted off of the forearm which is far less accurate and appealing than the only figure with the two barrel protruding forward totally raised from the hand. Overall I think I'd rather have the $4 back.

This entry was posted in Bandai, Hasbro, Rustin's Spoils of the Week and tagged Power Rangers, Star Wars, Thundercats. Bookmark the permalink.

9 Responses to Rustin's Spoils of the Week #53