Included with each of the pieces of the ML1 Terrax Build-A-Figure is a folded slip of paper bringing us "Tales of Terrax," explaining who he is to new fans. We haven't bothered putting of that info in the various Series 1 reviews, but now we're putting it all here. 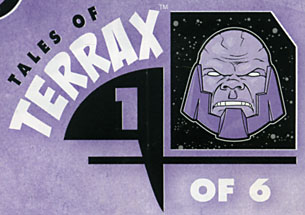 1 of 6
When the power of the Sphinx grew beyond imagination, the Fantastic Four was forced to turn to Galactus for help. The mighty Galactus agreed, but with a price. If he would stop the Sphinx, the Fantastic Four would bring him a new herald. Having no choice but to accept, the team travelled to Birj, the home planet of Terrax. But Terrax refused to go quietly. If the Fantastic Four was to save the Earth from total annihilation, they would be forced to take the uncooperative Terrax against his will!
read more
2 of 6
Nothing in the universe exists outside of the knowing of Galactus. In need of a new herald - one who would not be so protective of life - Galactus trained his sight on dictator Tyros the Terrible. Tyros used his dominion over stone to create living monoliths that patrolled his kingdom and kept power firmly in his grasp. Galactus must feed. Galactus must have! The world eater struck a deal with the Fantastic Four, who battled Tyros and brought him to Galactus. He gave Tyros the power cosmic, bestowed upon him his cosmic axe... and the fearsome Terrax the Tamer was born!
read more
3 of 6
Rebelling against his master, Terrax fled into space, hiding inside a black hole. With her ability to change sound energy into light, Dazzler was the only being capable of reaching him. Dazzler tapped the power cosmic, gifted to her by Galactus, converting an unending supply of sonic energy into light, allowing her to penetrate the dark depths of the black hole. She fought, subdued, and returned the wayward herald to his master. Unfortunately for the aspiring songstress, while it enabled her to perform incredible feats of intergalactic exploration, receiving the power cosmic did not provide a boost to her singing career.
read more
4 of 6
Terrax, released from his service of Galactus, lay helpless on Earth, broken and powerless. Victor Von Doom saw just the pawn he needed to finally defeat the Fantastic Four. The brilliant Dr. Doom kidnapped the former herald and restored a small dose of his cosmic power, building in a trigger that would destroy Terrax after he had served his purpose. Terrax vanquished the Four and then overwhelmed Von Doom, laying waste to the madman's mad plan. Freed from Galactus with no rival in sight, the Tamer would rise once more.
read more
5 of 6
Just when it seemed nothing stood between Terrax and a victory that would reshape the Earth's balance of power, the Silver Surfer swooped in to stop the renegade. After regaining some of the power cosmic as part of a plot by Dr. Doom, Terrax mistakenly thought he was strong enough to face the sentinel of the spaceways. As the Silver Surfer held Terrax at bay, Terrax was slowly consumed by his own cosmic power, blinking out of existence and disappearing into oblivion. When Terrax reformed, the Silver Surfer ensured his failure would be complete, exiling him into the distant reaches of space.
read more
6 of 6
When the Annihilation Wave roared through the universe not even Galactus was spared its wrath. Annihilus directed a special force to hunt down all of his heralds, part of a mad attempt to do what no entity had ever done: defeat the ravager of worlds. Terrax was captured and forced to serve Annihilus... but Terrax would be bound to no master. Breaking free, he not only destroyed the slave ship that held him captive, but was so consumed by rage he chopped an entire planet in two with his cosmic axe!
read more