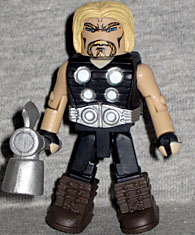 Proclaiming himself to be a god, Thor was thought to be insane before the manipulations of his evil brother Loki were brought to light. With his enchanted belt and hammer Thor is truly one of the most powerful beings in the Ultimate Universe.

Ultimate Thor, as we've said before, is a good old-fashioned liberal, not an anachronism in a cape, and his costume is more martial than his 616 counterpart's. This Minimate gets Juggernaut's boots, very thick and laced up to the straps around the tops, and a new chest cap that both bulks him up and creates his distinctive vest and belt. Those are all sculpted elements, by the way, not just painted. 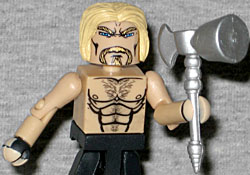 Thor comes with his big, scary hammer, of course. The design matches the comics perfectly, with a mallet on one side and an axe blade on the other. His hair is new, and his bushy mustache kind of makes him look like Hulk Hogan, since the Minimates can't really duplicate Bryan Hitch's artwork. If you take his vest off, you'll find a fully detailed torso beneath! He often went topless in the comics, so this figure gives you the ability to do that if you want. 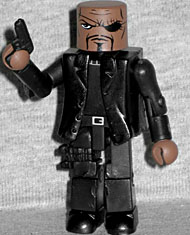 Charged with running both SHIELD and the Ultimates team, General Nick Fury is one of the most connected and influential men in the Ultimate Universe. Now revealed to have been a test subject for Project Rebirth, his true power remains a mystery.

Wait, he what? I read The Ultimates, and I certainly don't remember Nick Fury being anything other than human. Oh well. This is Ultimate Nick Fury, which means it's basically Samuel L. Jackson without being called such. Of course, Marvel had permission to use his likeness for the comics, so it's possible Art Asylum had permission for the toy, as well. He's dressed all in black, with a new jacket and a tiny pistol that holsters on his right leg.

I'm not crazy about Thor's face, but the rest of him is awesome, and Sam Jackson in Minimate form is just great!