Rustin's Spoils of the Week #84

It seems like every January I vow that I will open all of my Matty Collector junk as it comes in, and yet I still accumulate piles of untouched white boxes. Well, this year I'm attempting the same vow (though I'm already breaking it. I mean, why would I open Netossa? Especially since 80%+ of my MotUC collection remains un-opened). Add to that some good finds and behold ye the party! You know what, this Spoils... this is exactly why I love writing this column. Not to toot m'own horn but look at this variety! Predator and Playmobil in the same place as Gandalf and DC characters. Too. Much. Fun! 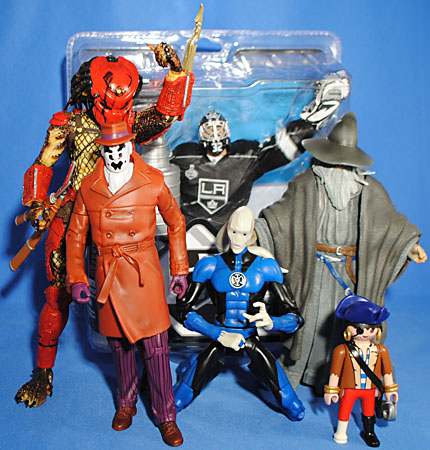 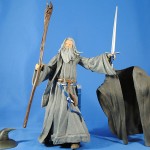 Against all odds this guy managed to pop up amongst the handful of Thorins at the only Toys R Us in my area carrying the 6" line, so I'm now 80% done with the first series! When opening and playing with him I was honestly very impressed by the detail of the sculpt, easily one of Gentle Giant's best! That heavy texturing is likely why the plastic used here is quite hard, meaning articulation is tight and limited. Add in his beard and hair and there is absolutely nothing to do with his head (I had hope it was a ball-and-socket joint like the 4" line and I could just pop it off to remove the scarf and allow some wiggle room but no such luck). Plus, his dress essentially renders all leg articulation pointless, though it does appear to be there. He does have balljointed ankles, which is a nice bonus. He comes with Glamdring (which can fit into a permanently attached scabbard), his staff and, of course, his hat. The latter is a solid sculpt it just sits with the brim way too low over the face, and with no real neck articulation there's precious little you can do about it. On the upside, though, he has amazing balljointed elbows that look equally good bent and straight - a marvel for baggy-sleeved figures! 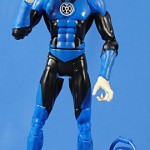 This is the first of the Matty Collector DCUC-continuation figures I've actually opened and I've gotta say... I'm impressed. I have a big passion for the various Lantern Corps and quite like this character design so I was pretty happy to see he was first on deck for Year Two, though I can't say I was all that excited based on photos and reviews. He's essentially more of the same in terms of that soft-detailed, painted-on costume look for the line, plus he has a big unsightly seam in his head-tail where the joint is. What I wasn't prepared for though was the super-articulation! That's right - this is a double-hinged knees and elbows guy complete with balljointed wrists and an actually functional neck! Who fell asleep at the wheel and let a well articulated figure out in this line!? The joints are too tight for easy posing but at least he has those options. Plus he get's an "it's the thought that counts" blue lantern accessory. He's an important character and a surprisingly fun toy for Mattel so I'll just go ahead and call him a must-have for any one with even a passing interest. 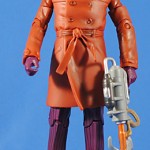 Again, consider me impressed. Yes, it's just a DCUC style take on the character but it turned out very well. There is some nice subtle shading going on with the overcoat that really goes a long way to making this guy look good. On top of that he's got remarkably clear paint details on his face and legs. What Saint Walker is to articulation Rorshach is to paint. He gets a decent Watchmen logo stand as well as his grapple-gun (which looks both off-model and too large based on memory and a quick flip through the book). I'd be remiss to not mention the packaging as well. I have a tendency to loathe novelty packaging but I gotta admit this time it's really nice; it's certainly the best execution of "collector friendly packaging" I've ever seen and now I'm going to have to find room to store it. Sure I would have infinitely preferred we get the Tim Bruckner sculpted DC Direct line or that this figure had come with alternate face pattern heads rather than the gun but this is a pretty darn good figure. Between him and Saint Walker Matty has really bumped up my expectations for this year so now the pressure is on! 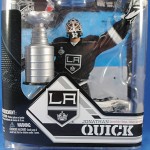 So I'm not interested in videogames, but I essentially hate sports. I really just don't get it. I mean, I "get it," I just don't get it. That said, hockey is pretty much the only one I can stand. I like the cold, that scoring is actually difficult and they have the coolest armor and costumes. One of my best friends is also wicked into hockey so when McFarlane made their step into sports figures she followed that line pretty religiously for several years and I joined on getting most every goalie and any other jerseys that looked cool to me. Well that died out about five years ago because it just lost all of the fun. I had to get this S.O.B., though, because he's a King and I'm from Los Angeles and because my friend and I have always marveled at Todd's inexplicable hatred of the Kings. He just makes them so infrequently and several, like this guy, are Canadian exclusives. Well at least this time he is available on at the spawn.com web-store (yeah, that still exists - cute, huh). Well, you've probably noticed he's still "M.I.B." - that's because, as a casual fan, I've never opened any of my hockey figures, tending just to hang them from pushpins and enjoy them as such. Thus it is local hero Jonathan Quick remains encased in carbonite. Man, this new, "modern" jersey is UG-LYYYY (but most NHL logos appear to be nowadays) and while he does come with the Stanley Cup he can't rightly enjoy it since he's in 'action pose,' and one that we've seen countless times before. So... yeah. This exists. I'm pleased to have a Kings goalie but am sorely reminded of why I walked away from this line and never looked back. 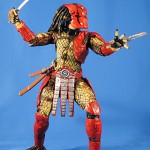 I remember seeing this guy at the SDCC booth this past summer and being somewhat impressed by the new direction, if not the bottom-of-the-barrel character selection. Well, now knowing it's from Sandy Collora's (he sculpted a bunch of toys for Mezco back when they launched) fan-film Dead End this figure is pretty exciting, more so than even NECA completing the "Lost Tribe" from Predator 2. It's an unprecedented move in the world of action figures and promises a very in-depth knowledge and passion for the Predator license. Best of all, this figure turned out great. He's basically a repaint of the Jungle Hunter 2.0 figure but with his new belt, helmet and bright red coloring he feels like an all-new figure. He also gets more accessories than any of the Lost Tribe, too - two sets of hands, open and "holding", and two differently length-ed katanas, which both fit in sheaths on the new belt. All around this figure is just as good as you've heard. I'd been suffering MAJOR Predator fatigue after completing the Lost Tribe but after this guy I'm really, really excited for what the future may hold! 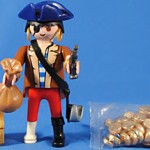 I stumbled across this dude at an art supply store and you know I had to get it! Not only is this a Specials release he's a figure I don't think I've ever seen before! He's a great pirate that's very much in the more realistic vein on the newest iteration of the Pirate theme and more pleasantly not some hokey captain for once. He gets a conspicuously painted on shirt which looks quite good and it's likely painted to allow for the scabbard/sash to fit over his torso. He also get's a great though ill-fitting hat, a sword, a pistol, a gold treasure box, a bag of gold coins and a sack of treasure. And I said gul'darn! That is a lot of accessories, especially the insane volume of gold coins! The real star of the set, though, is the tan colored sack. This sculpt has been coming out for decades and is always cast in yellow, unquestionably signifying golden contents. It's just a fact; I never questioned it. But now... now we get a realistic color and I gotta tell you, it looks phenomenal! I've definitely got to go buy one or two more of this guy just for all the darn treasure!

30 Responses to Rustin's Spoils of the Week #84