This is the latest in a series (of indefinite length and regularity) of blog posts memorializing cancelled toys. Our figure today is Mattel's Black Canary.

The Ray variant we showed you last month is far from the only DC figure that went unreleased before the end of Mattel's time with the license, so for the next few installments of Soon Forget, we'll be looking at ones that were displayed but never released. 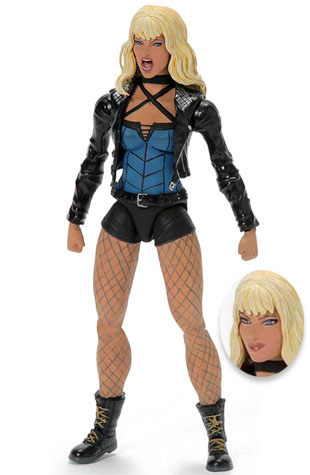 In the New 52, Black Canary was a former runaway who joined a covert government strike team, was framed for treason, and went on the run, then formed the Birds of Prey to help people who needed it. Later she went on tour with a rock band. That's the costume this toy would have given us, along with an alternate head showing her with her mouth open to release her sonic scream. The figure was never officially cancelled, but with Mattel losing the DC license as of this year, she's never going to be released.